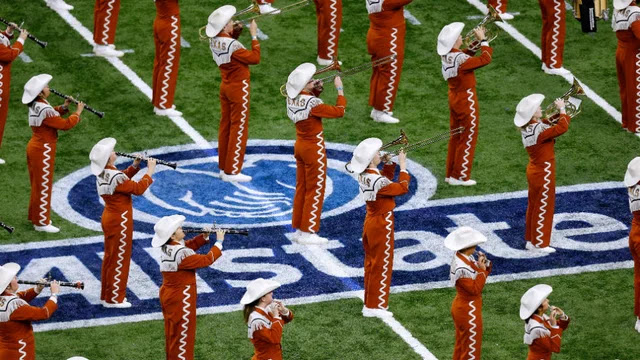 The Longhorn Band will not perform in Saturday’s Texas vs. Baylor football game after an internal survey found that the band does not have “necessary instrumentation” to play the school’s alma mater song “The Eyes of Texas,” The Daily Texan reports.
The survey asked band members if they would be willing to play the song, which came under fire over the summer due to its history. The message said this week’s survey would not impact whether the band performs at future games.
“Based on (survey responses), we do not have the necessary instrumentation, so we will not participate in Saturday’s game,” Longhorn Band director Scott Hanna said in a message to the band, obtained by The Daily Texan.
During Black Lives Matter protests over the summer, student-athletes and others called on UT to drop the song, which was originally performed at a minstrel show with performers in blackface, according to The Daily Texan, and its opening verse is a saying inspired by Confederate Gen. Robert E. Lee.
Douglas Dempster, the dean of the University of Texas’ College of Fine Arts, said last month that the band was “expected” to play the alma mater after band members said they wouldn’t play the song due to its racist history.
The message said the band was “fairly evenly divided in opinion.” However, a ranging proportion of responses within certain sections would prevent necessary instrumentation for the week.
“Moving toward resolution takes time and sustained effort,” Hanna said in the message. “The conversations that have started are an important step toward that goal.”
The announcement comes after several team members stood and sang “The Eyes” after Texas’s game against Oklahoma on Oct. 10, including quarterback Sam Ehlinger. A petition was started Tuesday to support the players and encourage others to stand for “The Eyes.”
Band members said they wanted more opportunities to talk and have discussions, according to the message, and band directors will facilitate those discussions.
“All of us on staff will do everything we can to create and maintain space for conversations,” Hanna said in the message.
Texas