Kushner: Black Americans have to 'want to be successful' 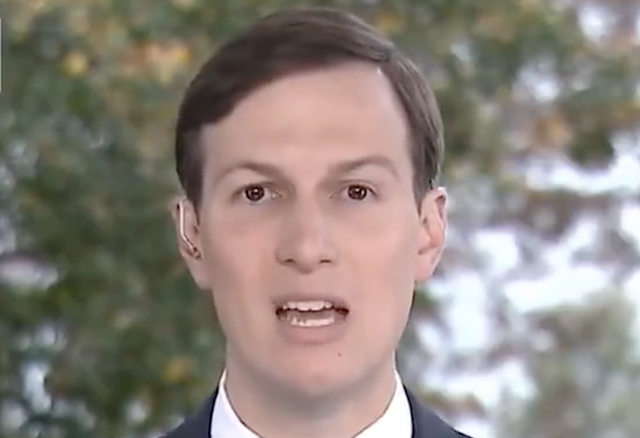 White House senior adviser Jared Kushner said Monday that in order for the president’s policies to be most effective, Black Americans must want to succeed.
“One thing we’ve seen in a lot of the Black community, which is mostly Democrat, is that President Trump’s policies are the policies that can help people break out of the problems that they’re complaining about,” Kushner, who is Trump's son-in-law, said during a Fox News interview. “But he can’t want them to be successful more than they want to be successful.”
“What you’re seeing throughout the country now is a groundswell of support in the Black community because they’re realizing that all the different bad things that the media and the Democrats have said about President Trump are not true and so they’re seeing that he’s actually delivered,” Kushner added.
His comments come just eight days before the presidential election, with nationwide polls consistently showing Trump trailing Democratic nominee Joe Biden, who also leads in many battleground states.
Black voter turnout hit a 20-year low in 2016, and both campaigns have focused heavily on courting Black Americans. Historically, Republican presidential candidates have done poorly with Black voters, but Trump garnered double-digit support among Black men in 2016.
But polls this cycle point to a significant lead for Biden over Trump with Black voters. In a New York Times-Siena poll released last week, 90 percent of Black respondents said they were or had already voted for Biden, while just 4 percent said the same for Trump.
Trump's reelection campaign has touted accomplishments ranging from prison reform and economic “opportunity zones” to the record-low unemployment rate for Black Americans before the coronavirus pandemic took hold.
“It’s disgusting to see internet trolls taking Senior Advisor Jared Kushner out of context as they try to distract from President Trump’s undeniable record of accomplishment for the Black community," White House press secretary Kayleigh McEnany said in a statement Monday. "From criminal justice reform and record [historically black colleges and universities] funding to record low Black unemployment and record high income increases, there is simply no disputing that President Trump accomplished what Democrats merely talked about.”
Kushner’s comments came in response to the White House meeting with rapper Ice Cube about policies that would bring more equity to Black communities around the country.
The Trump campaign and Republican National Committee have also tried to dispel the notion that Trump is racist, dismissing the president’s incendiary comments about race that have at times sparked bipartisan criticism.
“President Trump may not always say the right things, but he does the right things. He says what’s on his mind and he gets results,” Kushner said on Monday.
National