Judiciary Committee sets vote on Barrett's nomination for next week 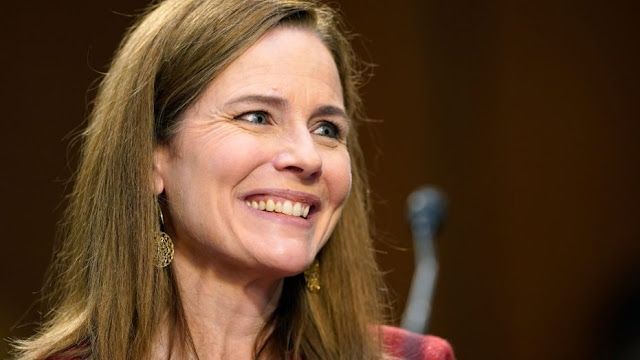 Senate Judiciary Committee Republicans scheduled a vote for next week on Judge Amy Coney Barrett's Supreme Court nomination.
The panel will vote on Barrett's nomination on Oct. 22 at 1 p.m. under a schedule offered by Senate Judiciary Committee Chairman Lindsey Graham (R-S.C.).
Barrett's nomination was on the Judiciary Committee's agenda for the first time on Thursday morning, but was widely expected to be held until Oct. 22. Under committee rules, any one senator can request that a nomination be delayed a week, and they routinely are.
Graham, with the support of GOP senators, moved to leapfrog a committee rule that requires two members of the minority party to be present before a nomination is formally held over. When Graham called up the vote, Sen. Dick Durbin (D-Ill.) was the only Democratic member of the panel present. But Sen. Richard Blumenthal (D-Conn.) showed up mid-vote, giving Graham a second Democratic senator.
"It's clear to me from reading in the paper is that what's going to happen is we're going to be denied the ability to operate as normal. I know what awaits us," Graham said about his decision.
When Durbin pointed out that he could not bring up the vote to schedule a vote on Barrett's nomination without a second Democratic senator present, Graham replied, "With all due respect, we've had this problem in the past. If we create this problem for you in the future, you're going to do what I'm going to do, which is move forward on the business on the committee."
But Democrats had signaled they did not intend to boycott Thursday's vote.
Even as Graham was speaking to call up the vote, Sens. Dianne Feinstein (D-Calif.) and Cory Booker (D-N.J.) were both spotted heading into the committee room, though they did not get into the room in time to vote.
Blumenthal was also asked during a conference call less than an hour before the business meeting if Democrats would boycott it and dismissed the idea.
"If we boycott the meeting today you know Sen. Graham has indicated that he'll just potentially vote it out of committee or change the rules or do whatever he wants to do," Blumenthal said.
"Boycotting a meeting is a tactic that could be used at some point, but I don't think today's meeting is the one where it would be appropriate or effective to do it," he added.
Blumenthal declined to say if Democrats would boycott the Oct. 22 meeting, where Barrett will get a vote.
Under committee rules, a majority of the panel, 12 senators, has to be present in order to report a nomination to the floor. Democrats have signaled that they will not help Republicans meet that quorum. Republicans can hit the requirement on their own as long as all the GOP senators are present.
Though Democratic senators largely kept their irritation over the Supreme Court nomination out of the first three days of the hearing on Barrett's nomination, their frustrations were on full display Thursday.
"I believe that this rushed, sham process is a disservice to our committee," Blumenthal said as he made his motion. "The purpose of doing it is simply to have a justice on the Supreme Court as the president has said to decide the election and to strike down the Affordable Care Act."
Democrats have fumed over the process Republicans are using to put Barrett on the bench by the end of the month.
"This is being done without any precedent in the time at least that I've been on this committee," Feinstein said. "It's being done I guess to show power and push someone through."
Republicans, if they confirm Barrett as expected, will set a precedent for how close to a presidential election a Supreme Court nominee has been confirmed. Though other nominees have been confirmed in a fewer number of days, they were further away from the election.
The decision to confirm Barrett also comes after Republicans refused to give Merrick Garland, then-President Obama's final Supreme Court nominee, a hearing or a vote ahead of the election in 2016. Republicans argue that their control of both the White House and the Senate this year is a significant difference.
Democrats acknowledge that they are powerless to stop Republicans from confirming Barrett this month without help from GOP senators.
"I recognize, Mr. Chairman, that this goose is pretty much cooked," Sen. Cory Booker (D-N.J.) told Graham during the committee meeting.
Because Republicans hold a 53-47 majority, Barrett could lose three GOP senators and still have Vice President Pence break a tie.
Senate Majority Leader Mitch McConnell (R-Ky.), speaking to reporters in Kentucky, said that he will tee up Barrett's nomination on Oct. 23, a day after the Judiciary Committee vote. That will set up a final vote on her nomination on the Senate floor for the week of Oct. 26.
"We have the votes," McConnell said.
National