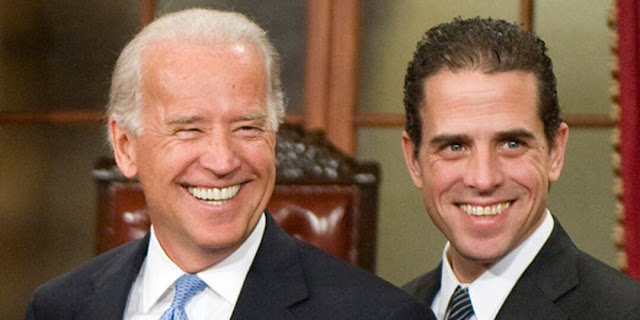 Today’s New York Post reports that an email on a found computer indicating Joe Biden met with Vadym Pozharskyi, an adviser to the board of Ukrainian energy company Burisma, while it employed his son. Whether or not you put a lot of faith in that particular email, the fact remains that Joe Biden does not believe that his son’s work on the board of Burisma, while he was directing the administration’s policies regarding Ukraine, represented a conflict of interest. In fact, the Democratic nominee contends Burisma was not trying to influence his decision making when it hired and employed Hunter.
Joe Biden believes his son was hired because he’s a “bright guy,” not because he was the vice president’s son. Biden’s testy exchange with NBC News anchor Savannah Guthrie back in February has disappeared down the memory hole.
“Do you think it was wrong for him to take that position, knowing it was really because that company wanted access to you?” Guthrie asked.
“Well, that’s not true!” Biden insisted. “You are saying things — you do not know what you are talking about. No one said that! Who said that? Who said that?”
“Don’t you think that it’s just one of those things where people think, ‘well, that seems kind of sleazy?’” Guthrie said. “Why would he have that job, if not for who his father was?”
“Because he’s a very bright guy,” Biden vowed.
Very few people believe that Burisma hired Hunter Biden — who had no experience in the energy industry — and paid him as much as $50,000 per month to serve on its board simply because he was a “bright guy.”
Last November, the Wall Street Journal reported that Burisma’s consulting firm kept mentioning Hunter Biden when it requested meetings with U.S. diplomats:
A consulting firm hired by Burisma Group mentioned that former U.S. Vice President Joe Biden’s son served on the Ukrainian gas company’s board so the firm could leverage a meeting with the State Department, according to documents and a former U.S. official.
The documents—email exchanges between State Department staff members made public this week—show that the consulting firm, Washington-based Blue Star Strategies, used Hunter Biden’s name in a request for a State Department meeting and then mentioned him again during the meeting as part of an effort to improve Burisma’s image in Washington.
[Karen] Tramontano met with the undersecretary, Catherine Novelli, on March 1, 2016, the documents show. During the meeting, Ms. Tramontano mentioned Mr. Biden served on the company’s board, according to a former State Department official familiar with the discussion.
In the contacts with the State Department, Ms. Tramontano said that Burisma hadn’t engaged in corruption and wanted to change the view of the company in Washington. The former official said that Hunter Biden’s position on the board wasn’t the reason that Ms. Novelli took the meeting and that no further action was taken after it took place.
And both the New Yorker and the Washington Post noted that other figures in the Obama administration saw Hunter Biden’s presence on the Burisma board as a potential conflict of interest, but their concerns or objections never spurred either Biden to alter the arrangement. The New Yorker wrote, in a long profile of Hunter Biden:
As the former senior White House aide put it, there was a perception that “Hunter was on the loose, potentially undermining his father’s message.” The same aide said that Hunter should have recognized that at least some of his foreign business partners were motivated to work with him because they wanted “to be able to say that they are affiliated with Biden.” A former business associate said, “The appearance of a conflict of interest is good enough, at this level of politics, to keep you from doing things like that.”
The Post reported:
Inside the vice president’s office, there was discussion about whether Hunter’s position on the board would be perceived as a conflict of interest, according to several former aides who spoke on the condition of anonymity to discuss private conversations.
One former adviser was concerned enough to mention it to the vice president, according to an adviser, but the conversation was brief, and other aides said they didn’t want — or see a need — to raise the issue.
Joe Biden cannot see conflicts of interest involving his family, whether it is his son Hunter or his brother James. Hunter Biden’s entire career has been built upon companies that are influenced by his father’s office, lobbying, and foreign investors seeking government favors. The Biden campaign can shout all it likes about the Trump family and the Trump businesses, but that does not change any of the facts.
Opinion