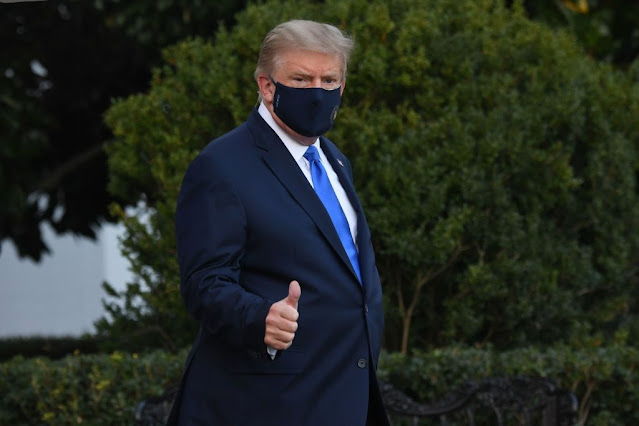 A growing number of top Republicans in President Trump’s orbit have tested positive for the coronavirus in recent days, leaving the White House, Senate and Trump campaign to grapple with a frightening health crisis a month out from the election.
Trump is hospitalized at Walter Reed National Military Medical Center with a mild cough, congestion and fatigue. First Lady Melania Trump has also received a positive diagnosis, as has senior White House adviser Hope Hicks, who had been traveling with Trump to fundraisers, campaign events and the presidential debate.
Kellyanne Conway, the former special assistant to the president, tested positive after recently attending a crowded Rose Garden event to unveil the president’s pick to replace the late Justice Ruth Bader Ginsburg on the Supreme Court.
On the political side, Trump’s campaign manager Bill Stepien was diagnosed with coronavirus on Saturday after traveling with the president to Tuesday’s debate. Republican National Committee chairwoman Ronna McDaniel is sick with COVID-19. Former New Jersey Gov. Chris Christie, who along with Hicks helped Trump prepare for the debate, is also sick.
Three Republican senators have also fallen ill with the coronavirus this week.
Sens. Mike Lee (R-Utah) and Thom Tillis (R-N.C.) have been diagnosed with the coronavirus. Both senators are on the Judiciary Committee, which plans to meet in nine days to begin hearings on Trump’s Supreme Court pick Amy Coney Barrett. Sen. Ron Johnson (R-Wis.) tested positive for coronavirus on Friday as well.
There are few details about the severity of their illnesses. Stepien is the youngest to be diagnosed, at 42 years old, while Trump is oldest, at 74.
White House physician Sean Conley said Saturday that Trump is doing “very well” and that he’s “extremely happy with the progress the president has made.”
However, a source familiar with the president’s health told reporters that Trump’s vital signs over the past 24 hours were “very concerning” and that the next 48 hours would be “critical in terms of his care.”
“We’re still not on a clear path to a full recovery,” the person said.
Vice President Pence, who would assume power if the president is incapacitated, has tested negative for the coronavirus. Pence will fill in for Trump at campaign rallies and is scheduled to host an event in Peoria, Ariz. on Thursday.
The snowballing COVID-19 cases among top Republicans come as the party, from Trump on down, has been criticized for doubting the effectiveness of masks and flouting social distancing recommendations.
Trump has talked down the importance of masks, even mocking Democratic nominee Joe Biden for wearing a mask at Tuesday’s presidential debate.
The president has also continued to hold massive rallies throughout the pandemic, although many have been in open-air facilities. Former GOP presidential candidate Herman Cain died after being hospitalized with COVID-19 in late July. He attended an indoor rally Trump held in Tulsa, Okla., in June.
While it’s too early to say where the Republicans may have contracted the disease, many were at the Rose Garden event where Barrett was officially nominated to the Supreme Court. That event featured a private indoor component later in the evening, with photos showing long lines of people without masks milling about.
Trump, Melania Trump, Christie, Lee, Tillis and Conway all attended the Rose Garden ceremony, as did Notre Dame President Rev. John Jenkins, who also tested positive this week.
Christie and Hicks met privately with Trump to prepare for the debate and Christie said they did not wear masks in that setting.
Biden tested negative for the coronavirus after the debate but the city of Cleveland says that 11 individuals who were either members of the media or worked on logistics around the debate have tested positive for the disease.
Those people did not have access to the debate hall, where several members of Trump’s family watched the showdown between Biden and the president without masks on.
The diagnoses raise questions about how the campaign, White House and Senate will function in the coming weeks, that will feature an election and an expected vote on Trump’s third nominee to the U.S. Supreme Court.
Senate Majority Leader Mitch McConnell (R-Ky.) says the Judiciary Committee plans to move forward with Barrett’s hearings on Oct. 12. Lee and Tillis say they hope to return to the Senate in time to vote on her nomination on Oct. 22. Republicans hold a 12-10 majority on the Judiciary Committee.
Congress is under pressure now to implement a rapid testing protocol as the number of lawmakers who have become has grown.
The Trump campaign has postponed some events and plans to go virtual with others that Trump was supposed to headline in the coming days and weeks.
Pence will take over for Trump at some rallies. Marc Lotter, the campaign’s director of communications, tweeted out pictures of large gatherings of Trump supporters – many of them not wearing masks – at events with Gov. Kim Reynolds (R) across Iowa on Saturday.
Trump trails Biden by a large margin nationally and has a lot of ground to make up in the key battleground states that will determine the outcome of the election on Nov. 3.
National