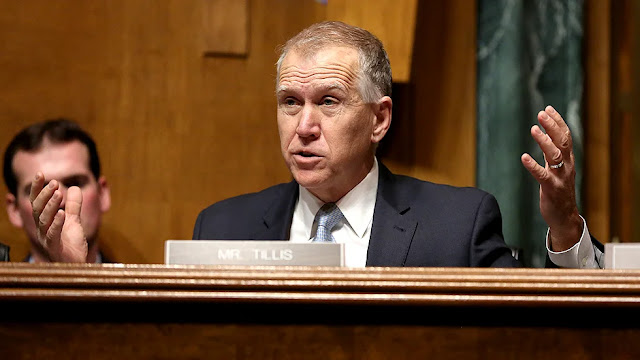 Sen. Thom Tillis (N.C.) said on Friday that he has tested positive for the coronavirus, becoming the second GOP senator who was at the White House on Saturday to be diagnosed with the virus.
"Over the last few months, I’ve been routinely tested for COVID-19, including testing negative last Saturday, but tonight my rapid antigen test came back positive," Tillis said in a statement.
The news of Tillis's diagnosis comes as Washington was upended after President Trump disclosed that he had tested positive for the virus, jolting an already chaotic election year.
Tillis, who said he is currently asymptomatic, is the fourth senator known to have tested positive, and the second member of the Judiciary Committee.
Sens. Rand Paul (R-Ky.) and Bill Cassidy (R-La.) both announced they had tested positive in March and August, respectively. Sen. Mike Lee (R-Utah), who was also at the White House event on Saturday and was seen not wearing a mask, announced earlier Friday that he had tested positive.
"I will be following the recommendations of my doctor and will be self-isolating at home for 10 days and notifying those I’ve been in close contact with," said Tillis, who was seen in photos wearing a mask at the White House event.
Tillis, like Lee, participated in committee meetings and caucus lunches in the Capitol this week, and also interacted with reporters.
Tillis is in the final stretch of a tough reelection fight against Democratic nominee Cal Cunningham, who has led the GOP senator in several recent polls. The two men faced off in a debate Thursday night. Cunningham said in a tweet Friday night that he will now get tested.
Tillis's campaign said Friday night that staffers who were around the senator will now quarantine.
"The Tillis campaign staffers who were exposed to the Senator this week will now quarantine and will receive tests in the coming days. Our Charlotte campaign headquarters is now closed and we are halting all in-person campaign events until further notice," said campaign manager Luke Blanchat. "Additionally, we are reaching out to any individuals who may have come into contact with Senator Tillis during the campaign events we held this week."
The diagnosis for Tillis and Lee is injecting fresh uncertainty into the GOP timeline for trying to confirm Supreme Court nominee Judge Amy Coney Barrett.
Senate Majority Leader Mitch McConnell (R-Ky.) and Senate Judiciary Committee Chairman Lindsey Graham (R-S.C.) both pledged earlier Friday that they would move ahead with Barrett's nomination as planned, with a hearing set to start Oct. 12.
"Just finished a great phone call with @POTUS. He’s in good spirits and we talked business — especially how impressed Senators are with the qualifications of Judge Barrett. Fullsteam ahead with the fair, thorough, timely process that the nominee, the Court, & the country deserve," McConnell said in a tweet.
After the hearing, the Senate Judiciary Committee is expected to hold a vote on Barrett's nomination Oct. 22, paving the way for a final Senate vote during the last week of October.
Both Tillis and Lee, according to timelines given in their statements, are planning to return to the Senate Judiciary Committee in time for the vote on Barrett's nomination. But if they are still absent it would throw a curveball into Graham's plans.
Though senators can vote by proxy in committee business meetings, aides confirmed Friday that those votes do not count if they change the outcome. Unlike on the Senate floor, there is not a tiebreaker in committees and a tie is the same as a nomination failing.
Secretary of State Mike Pompeo's nomination hit a similar, temporary snag, in the Senate Foreign Relations Committee in 2018; Republicans held a one-seat advantage and GOP Sen. Johnny Isakson (Ga.) was going to vote for Pompeo by proxy, but because including his vote would have changed the outcome, it could not be counted and Pompeo was temporarily stuck at a tie. In the end, Sen. Chris Coons (D-Del.) agreed to vote present as part of a previous agreement with Isakson.
Four other members of the Judiciary Committee — Sens. Josh Hawley (R-Mo.), Marsha Blackburn (R-Tenn.), Mike Crapo (R-Idaho) and Ben Sasse (R-Neb.) — were seated near Tillis and Lee on Saturday. Spokespeople for Blackburn, Crapo and Hawley did not immediately respond to questions on Friday night about if they had been tested.
Sasse, according to a spokesman, was tested Friday, but his test came back negative.
"After consulting with the Senate attending physician and Nebraska doctors, he will work remotely from his home in Nebraska, undergoing further testing. He will return to Washington for in-person work beginning October 12," the spokesman added.
But McConnell, speaking in Kentucky earlier Friday, rejected the idea of delaying Barrett's nomination until senators found out who, if anyone else, would test positive for the coronavirus. Graham disclosed Friday that he had been tested, but was negative.
"I'm planning on moving to the nomination as soon as it comes out of committee," McConnell said, in one of his clearest indications yet that he will schedule a vote on Barrett's nomination before the Nov. 3 election.
Democrats, however, are calling on Republicans to put a hold on the schedule for Barrett until senators are able to better understand their potential level of exposure.
"We now have two members of the Senate Judiciary Committee who have tested positive for COVID, and there may be more. I wish my colleagues well," Senate Minority Leader Charles Schumer (D-N.Y.) tweeted on Friday night. "It is irresponsible and dangerous to move forward with a hearing, and there is absolutely no good reason to do so."
National