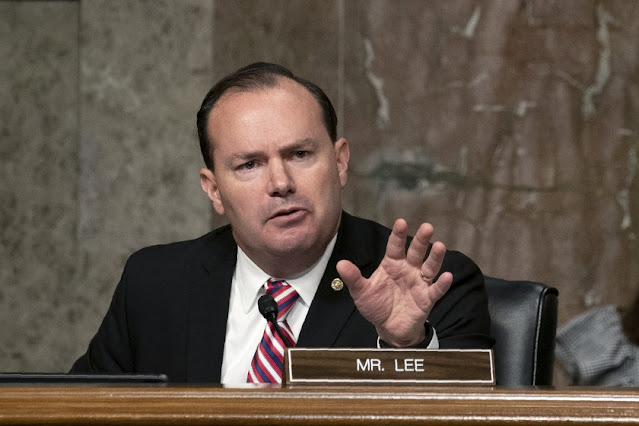 Sen. Mike Lee (R-Utah) said on Friday that he has tested positive for the coronavirus, news that came as the nation was reeling from President Trump's own coronavirus diagnosis.
Lee, the third senator known to have tested positive for COVID-19, said in a statement he took a coronavirus test on Thursday after experiencing symptoms similar to those he has had for longtime allergies.
"Unlike the test I took just a few days ago while visiting the White House, yesterday's test came back positive. On advice of the Senate attending physician, I will remain isolated for the next 10 days," Lee said in a statement.
Lee's announcement comes just hours after Trump disclosed that he and first lady Melania Trump have tested positive for the coronavirus. Lee was at the White House on Saturday.
Sen. Rand Paul (R-Ky.) in late March was the first senator to announce that he had tested positive for COVID-19, followed by Sen. Bill Cassidy (R-La.) in August.
Democratic Sens. Bob Casey (Pa.) and Tim Kaine (Va.) have both said they tested positive for coronavirus antibodies, suggesting they were previously exposed to the virus.
Lee, who previously quarantined in March because of Paul's diagnosis, has been in the Capitol this week. He met with Judge Amy Coney Barrett, President Trump's Supreme Court nominee, on Tuesday, took part in closed-door GOP caucus lunches and was at the Senate Judiciary Committee's business meeting on Thursday.
His disclosure that he has tested positive will likely add new urgency to the ongoing discussion about setting up routine testing in the Capitol. Senate Minority Leader Charles Schumer (D-N.Y.) said in a separate statement on Friday that Trump's diagnosis underscored the need for testing in the Capitol, and House Majority Leader Steny Hoyer (D-Md.) and Speaker Nancy Pelosi (D-Calif.) also discussed the issue on Friday.
Lee is on the Judiciary Committee, which is expected to start its hearing for Barrett's confirmation on Oct. 12. Lee, in his statement, said he would return to the Senate in time to vote on her nomination on Oct. 22. With Republicans holding a 12-10 majority, if Lee is absent the party will need every member present and voting to send the nomination to the floor.
"I have spoken with Leader McConnell and Chairman Graham and assured them I will be back to work in time to join my Judiciary Committee colleagues in advancing the Supreme Court nomination of Judge Amy Coney Barrett in the committee and then to the full Senate," Lee said.
Both McConnell and Sen. Lindsey Graham (R-S.C.) indicated on Friday that they plan to move forward with Barrett's nomination as planned.
"Just finished a great phone call with @POTUS. He’s in good spirits and we talked business — especially how impressed Senators are with the qualifications of Judge Barrett," McConnell tweeted. "Full steam ahead with the fair, thorough, timely process that the nominee, the Court, & the country deserve."
National