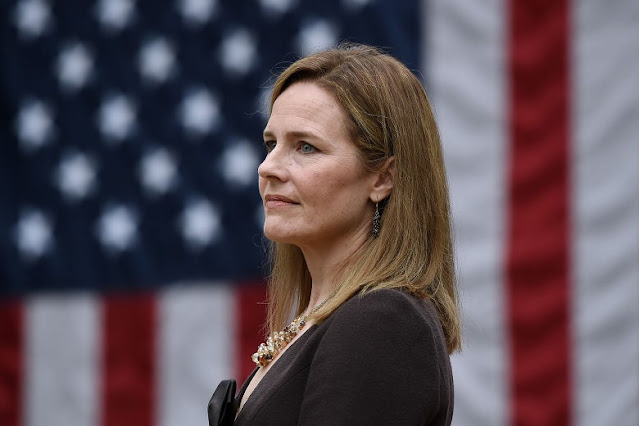 Republicans on the Senate Judiciary Committee voted on Thursday to advance Judge Amy Coney Barrett’s Supreme Court nomination after Democrats boycotted the vote.
The panel voted 12-0 to send Barrett’s nomination to the full Senate, paving the way for President Trump’s nominee to be confirmed to the Supreme Court early next week. Every Republican on the panel supported her nomination and no Democratic senator voted.
Every GOP senator was present for the vote, meeting the committee's rule that 12 members of the panel must be present to report a nomination to the full Senate.
But the committee also requires two members of the minority party to be present in order to conduct business. Graham, however, made it clear that he would move forward regardless of the committee's rules.
"As you know our Democratic colleagues informed the committee last night that they will not participate in the hearing, that was their choice. It will be my choice to vote the nominee out of committee. We're not going to allow them to take over the committee," Graham said on Thursday.
Instead of attending the hearing, Democrats put large posters around their seats of individuals they talked about during last week's hearing who would be negatively impacted if the Supreme Court, with Barrett confirmed to succeed late Justice Ruth Bader Ginsburg, strikes down the Affordable Care Act.
Democrats announced on Wednesday that they would boycott the hearing, calling it a "sham" process.
"Fearing a loss at the ballot box, Republicans are showing that they do not care about the rules or what the American people want, but are concerned only with raw political power," Senate Democratic Leader Charles Schumer (D-N.Y.) and Democratic members of the panel said in a joint statement.
"We will not grant this process any further legitimacy by participating in a committee markup of this nomination just twelve days before the culmination of an election that is already underway," they added.
National