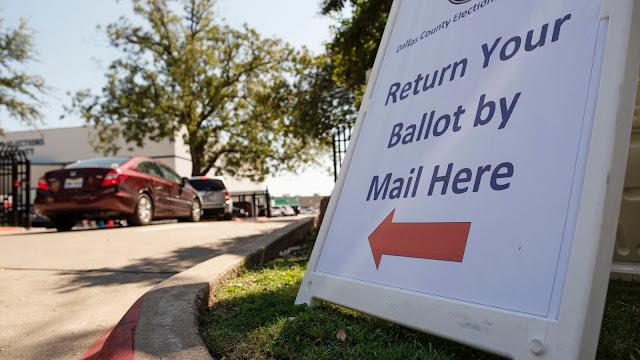 A federal appeals court on Saturday granted a temporary administrative stay, allowing Texas Gov. Greg Abbott’s directive for one location per county for ballot drop boxes to remain in place for now.
The grant from the United States Court of Appeals for the Fifth Circuit means the directive from Abbott, a Republican, will stand until the court has considered the state’s motion for a stay on its merits.
Texas Attorney General Ken Paxton had filed an emergency motion Saturday for a stay pending appeal to block a district court order that would have allowed county officials to accept hand delivery of mail-in ballots at any county annex or satellite office.
The motion seeks to require eligible voters to hand-deliver their ballots to a single early voting clerk’s office to ensure ballot security, his office said in a release.
“The district court’s order undermines our election security, disrupts the democratic process, and will only lead to voter confusion. It cannot stand,” Paxton said in the news release. “Mail-in ballots are particularly vulnerable to fraud. Protections that ensure their security must be upheld and my office will continue to fight for safe, free and fair elections.”
Paxton’s motion comes just a day after a federal judge blocked Abbott’s directive that limited ballot drop boxes to one per county. Lawsuits were filed last week by several groups seeking to block the directive, alleging the move would suppress voters.
Texas