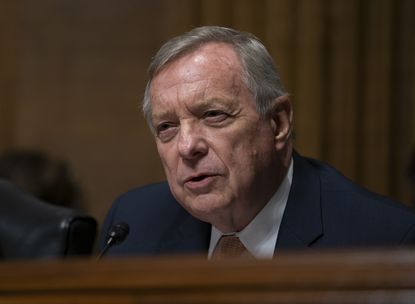 At the first Senate Judiciary Committee hearing this morning considering the nomination of Judge Amy Coney Barrett to the Supreme Court, Senator Dick Durbin (D., Ill.) insisted that the contentious confirmation process is the fault of Republicans.
In his own opening remarks, Senator Lindsey Graham (R. S.C.), the chair of the committee, pointed out that Justices Ruth Bader Ginsburg and Antonin Scalia were confirmed to the Court by an overwhelming majority of senators. Ginsburg was approved by a 96-3 vote, and Scalia was confirmed unanimously, with 98 votes in his favor.
Pointing to these votes, Durbin said, “Can this be the same the Senate? It’s not. The reason those votes were so overwhelming was because people lived by the rules. They lived by the traditions of the Senate, and they had mutual respect for one another. This process hasn’t adhered to those guidelines.”
Durbin went on to insist that Republicans’ “haste” to fill the vacancy left by Ginsburg’s death is unfair to the Senate and to Barrett, the nominee.
But Durbin entirely ignored that, in the decades following those Senate confirmation votes on Scalia and Ginsburg in 1987 and 1993 respectively, Democrats have almost entirely refused to vote in favor of every nominee appointed to the Court by a Republican president.
Since Ginsburg’s confirmation, only Justice Stephen Breyer — nominated by Bill Clinton — received anything close to the kind of unanimous backing that previous nominees had received in their votes; he was confirmed 87-9.
In 2005, when John Roberts was nominated to replace Chief Justice William Rehnquiet, 22 Democratic senators voted against his confirmation. The confirmation vote for Justice Samuel Alito in 2006 was far closer, 58-42. Justices Sonia Sotomayor and Elena Kagan were confirmed by larger majorities, with a number of Republicans crossing the aisle; those votes were 68-31 and 63-37 respectively.
But it was the last two Supreme Court fights that especially showcased how much Democrats have politicized the confirmation process. In 2017, Gorsuch was confirmed 54-45, after Senate Democrats attempted to filibuster to prevent the vote. Just three Democrats joined Republicans in voting to confirm him. In 2018, Brett Kavanaugh was confirmed 50-48 after a grueling, hyperpartisan fight, in which Senate Democrats who had already refused to vote for him embraced uncorroborated allegations that he had committed sexual assault, despite the fact that he had been vindicated by an FBI investigation.
Despite what Durbin asserted this morning, all of these highly politicized votes in which Democrats refused to back GOP nominees took place long before Senate Republicans moved to confirm Barrett this fall, a decision that is perfectly legitimate, perfectly constitutional, and in line with past precedent.
Opinion