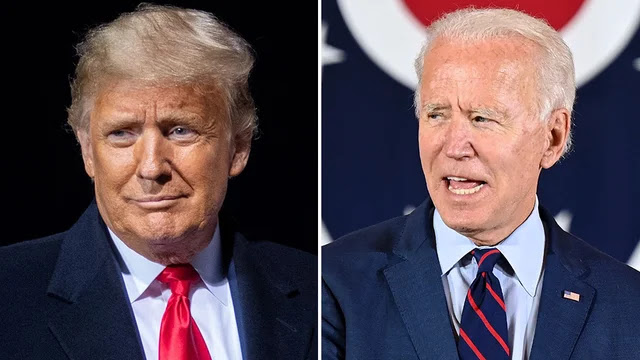 President Trump and Democratic presidential nominee Joe Biden will compete for the attention of millions of Americans on Thursday night in dueling televised town halls, with Trump’s representing one of his few remaining opportunities to make his case to voters ahead of Election Day.
The competing town halls will be held in lieu of the second presidential debate, which was scrapped last week after Trump objected to plans – put in place over concerns about the coronavirus pandemic and the president’s personal battle with COVID-19 – to hold the event virtually.
Biden will appear at an ABC News town hall, while Trump is set to participate in a town hall hosted by NBC News. Both events are scheduled to start at 8 p.m. EDT, meaning that both candidates will be competing for the same audience.
But the stakes are particularly high for Trump. He’s trailing Biden in most national and battleground state polling. And with fewer than three weeks to go before Election Day, he’s running out of time to turn around his imperiled reelection bid.
“Right now, it seems to me that the reason he’s losing is people are just processing this through the lens of how they feel about Trump,” Scott Jennings, a Republican strategist, said. “The town hall is an opportunity to do one thing and that’s to get people to think about the race as a choice and not a referendum.”
Jennings said that the town hall will ultimately be a test of whether Trump can clearly contrast his agenda with that of Biden and shift attention away from his own record in the White House.
“You want people to think that you’ve got a better plan, or at least that your plans aren’t as scary as the other guy’s plans. But that requires Trump to articulate his agenda,” Jennings said, adding that so far, Trump “hasn’t articulated much in the way of a second-term agenda.”
Jon Reinish, a Democratic strategist and former aide to Sen. Kirsten Gillibrand (D-N.Y.), said that the town halls will give both candidates an equal opportunity to speak directly to voters rather than argue over one another as they would in a debate.
“This gives Joe Biden a great opportunity to do what he does best and do what he did especially well in the first debate, which is talk directly to voters and answer their concerns,” Reinish said.
“If Donald Trump was running an intelligent, strategic campaign, he would use this opportunity to do the same and to try to make some last ditch effort to turn the tide of this race,” he continued before adding: “What we are very likely to get is a red-faced, bitter, resentful conversation about Hillary Clinton’s emails or conspiracy theories.”
The dueling town halls come during a particularly tumultuous stretch for Trump. His performance in the first presidential debate last month was widely panned, and his poll numbers are eroding at a time when millions of Americans are already casting their ballots.
At the same time, the president was hospitalized earlier this month after being diagnosed with COVID-19. He was released a few days later, but faced criticism for his push to resume in-person campaigning despite questions about the public health risks of doing so.
Those public health concerns prompted the Commission on Presidential Debates last week to move the second debate between Biden and Trump to a virtual format.
But Trump quickly shot down that plan, insisting that the debate be held in person. The commission eventually canceled the debate after negotiations over the format broke down. A final presidential debate is still scheduled for Oct. 22.
Biden quickly scheduled a televised town hall in Philadelphia. Trump’s campaign eventually agreed to a similar event in Miami hosted by NBC News. The town hall will be held outdoors, with Trump and the moderator, NBC’s Savannah Guthrie, seated at least 12 feet apart from one another.
NBC News said on Wednesday that it had received a statement from Clifford Lane, clinical director at the National Institutes of Health, saying that he and Anthony Fauci, the nation's leading infectious diseases expert, had reviewed the president’s latest medical data and concluded “with a high degree of confidence” that Trump is “not shedding infectious virus.”
Trump’s town hall is almost certain to win a larger audience than Biden’s. The event will be simulcast on both MSNBC and CNBC, while Biden’s town hall will only be broadcast on ABC.
For Trump, who has boasted about his ability to drive television ratings for years and sees them as a sign of approval, a large audience on Thursday night could be held up by his aides and allies as a sign of success. Democrats, meanwhile, are playing down the significance of audience size.
“I think the ratings contest is far less of what matters, because it’s certainly not inconceivable that more voters will pour a drink, get a bowl of popcorn and tune in to see the Trump roadkill,” Reinish said. “It’s entertainment in the same way as [the Ultimate Fighting Championship].”
National