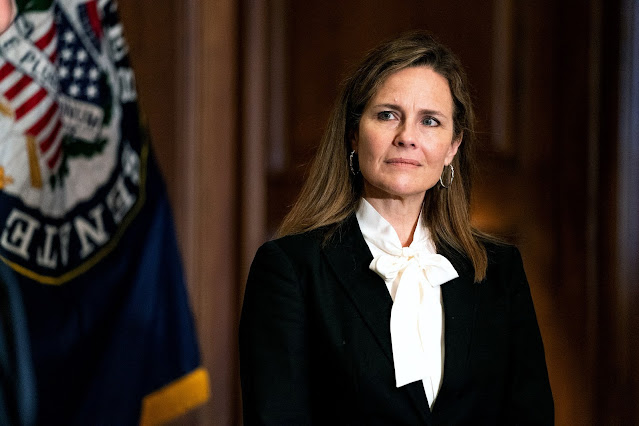 Democratic members of the Senate Judiciary Committee signaled on Monday that they will not raise Supreme Court nominee Amy Coney Barrett's religion during a days-long hearing.
While a number of Republicans last week accused Democrats of preparing to use Barrett's faith against her, it was exclusively GOP senators who brought it up on the first day of her confirmation hearing before the Senate Judiciary Committee — and Democrats said they intended to keep it that way.
"I and my colleagues will focus, Judge Barrett, on your legal writings, your opinions, your articles, your speeches as a law professor and judge," Sen. Chris Coons (D-Del.) told Barrett during his opening statement during Monday's hearing.
Sen. Dick Durbin (D-Ill.), asked if he believed any Democrat on the committee would bring up Barrett's religion, said, "Can't think of a single one."
Democrats have warned that raising the issue would only provide election fodder for Republicans, who have accused Democrats of trying to apply a "religious test."
Democratic presidential nominee Joe Biden, who was a longtime member and chairman of the Judiciary Committee, said separately on Monday that he believed Barrett's faith should not be part of the debate over her nomination.
"No. I don’t think there should be any questions about her faith," Biden told reporters.
Biden instead said Democrats should keep the focus on health care. Democrats on the panel homed in on the potential impact Barrett, if she's confirmed, could have on the Affordable Care Act, as well as Trump's push to get a justice on the bench before the Nov. 3 election.
But Republicans have pointed back to remarks made by Sen. Dianne Feinstein (D-Calif.), who while questioning Barrett in 2017 about if she could separate her beliefs from her job as a judge, said, “The conclusion one draws is that the dogma lives loudly within you."
Even though no Democrats brought up Barrett's faith as the hearings got underway, Sen. Josh Hawley (R-Mo.) argued that by bringing up Griswold v. Connecticut, a 1965 ruling on contraception use, Coons was, in effect, raising questions about Barrett's faith.
"Now I just heard my colleague Sen. Coons make a reference to an old case, the Griswold case, which I can only assume is another hit at Judge Barrett's religious faith referring to Catholic ... beliefs," Hawley said. "I don't know what else it could be since no one has challenged this case, it's not a live issue and hasn't been for decades."
Coons had pointed to several cases, including saying that he was worried that cases like Griswold v. Connecticut "may be in danger of being stripped down."
Coons, asked about Hawley's statement, brushed off the question, saying that he had been focused in his opening statement on health care and would stay focused on that.
“I'm not going to help Sen. Hawley run for president, I mean my focus today was on the concerns that I'm hearing from Delawareans which was that there is a Supreme Court case a week after the election where the Affordable Care Act is at risk," Coons told reporters.
National