Cornyn: Trump 'let his guard down' on coronavirus 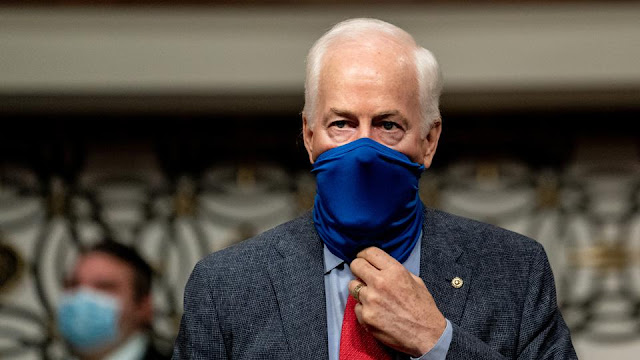 Sen. John Cornyn (R-Texas) said Monday that President Trump “let his guard down” on the coronavirus, in some of the toughest comments yet from a GOP lawmaker about the president’s handling of the virus after Trump announced his positive test late Thursday night.
“I think he let his guard down, and I think in his desire to try to demonstrate that we are somehow coming out of this and that the danger is not still with us — I think he got out over his skis and frankly, I think it’s a lesson to all of us that we need to exercise self discipline,” Cornyn told the Houston Chronicle editorial board.
The newspaper reported that the comment came after Cornyn was asked about Trump rarely wearing a mask and holding largely mask-less events such as the Supreme Court nomination announcement where multiple attendees have now announced positive tests.
Cornyn, in addition to being the former No. 2 Republican in the Senate, is facing an election in less than a month against Democrat MJ Hegar. Cornyn is favored in the race, as the Cook Political Report rates it “likely Republican,” but it's still competitive.
Cornyn said Trump’s policy responses like shutting down travel from China and supporting coronavirus aid packages “demonstrated the seriousness of the virus,” the Chronicle reported, but he also said Trump’s rhetoric sometimes “creates confusion.”
“He tries to balance that with saying, ‘Well you know, we got this.’ And clearly we don’t have this,” Cornyn said. “I think the biggest mistake people make in public life is not telling the truth, particularly in something with as much public interest as here because you know the real story is going to come out.”
The string of coronavirus cases among top Republicans — not only the president, but also White House officials, RNC Chair Ronna McDaniel and several GOP senators — has brought the virus further to the forefront of the national discussion at a time when many Republicans would rather be emphasizing the Supreme Court nomination of Amy Coney Barrett.
Cornyn made clear he prefers Trump over Democratic nominee Joe Biden, arguing that Biden would be pulled far to the left.
“If you’re asking me to choose between the policies of a Biden presidency with the pressure he’ll get from the left of his own party … I would vote for the president and his policies,” he told the Chronicle.
National Texas