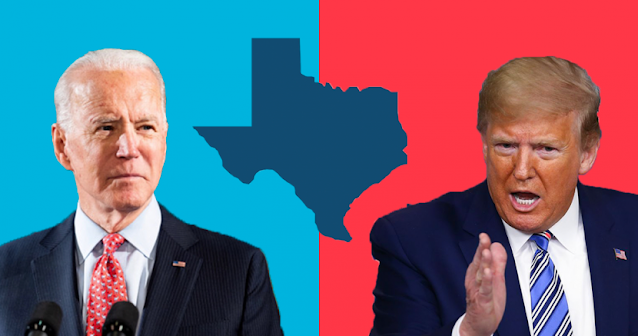 The Cook Political Report on Wednesday moved the presidential race in Texas from "lean Republican" to "toss-up" on Wednesday, another indicator that the longtime Republican stronghold could finally turn blue in November.
The shift from the nonpartisan election handicapper comes as polling in the state shows Democratic nominee Joe Biden closing the margin with President Trump, who won the Lonestar State by 9 points over Hillary Clinton in 2016.
According to the RealClearPolitics polling average, Trump holds a 2.6-point lead in the state.
While Biden does not necessarily need Texas to get the 270 Electoral College votes needed to win the presidency, the state is of far more significance to Trump.
According to Cook, Trump needs to win every state in the website's "toss-up" column, including Maine's 2nd Congressional District, to win the election. Additionally, Trump would need to win at least two of the seven states in Cook's "lean Democratic" section.
Biden and his Democratic allies have increasingly turned their attention toward Texas, pouring in money and making visits to the state. Democrats say they have been encouraged by the massive early vote turnout in the state, which reached a record high on Monday, with 46 percent of registered voters in the state casting their ballots so far.
Democrats appear poised to make inroads at the down-ballot level in the state as well. Cook recently moved the Senate race between incumbent Sen. John Cornyn (R-Texas) and Democrat M.J. Hegar from "likely Republican" to "lean Republican."
At the House level, Cook rates the races in the state's 21st, 22nd, and 24th districts as "toss-ups." The website rates the 3rd and 10th districts as "lean Republican," while it puts the 2nd, 6th, 25th, and 31st districts in "likely Republican."
Texas Democrats also see hope in making inroads in the state House, where polling shows them with leads in 11 districts.
Texas