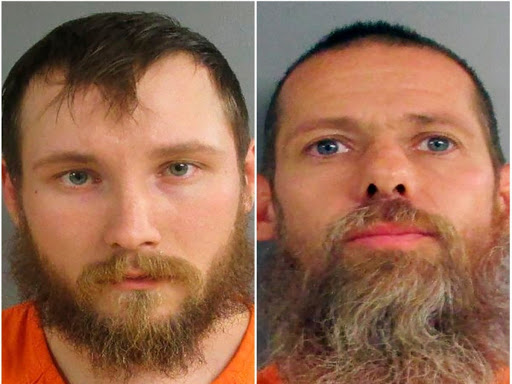 Michigan authorities on Friday set a $10 million bond each for two of the men allegedly involved in a plot to raid the state Capitol building in Lansing and kidnap Michigan Gov. Gretchen Whitmer (D).
The Michigan Attorney General’s office announced the charges in a press release Friday following an arraignment hearing. Pete Musico, 42, and Joseph Morrison, 26, were charged with counts of terrorism, gang membership, providing support for planned terrorist actions and possessing a firearm during the commission of a felony.
Four additional men were also charged in connection with the plot for felonies of supporting terrorist acts and possessing firearms, with each jailed on $250,000 bond. Authorities are also working to extradite another man from South Carolina, where he was arrested this week, to face similar charges.
According to the release, Michigan Attorney General Dana Nessel (D) filed a total of 19 state felony charges against the seven individuals known to be affiliated with the militia group Wolverine Watchmen. Another six individuals have been charged in federal court.
In the statement, the state attorney general's office said the charges came after the execution of a search warrant Wednesday “in a joint operation with the U.S. Attorneys of the Eastern and Western districts of Michigan, the Federal Bureau of Investigation and the Michigan State Police.”
Authorities added that in addition to allegedly planning the raid on the state Capitol building and the kidnapping of the governor, the “suspects were alleged to have called on the groups’ members to identify the home addresses of law enforcement officers in order to target them; made threats of violence to instigate a civil war leading to societal collapse.”
The arraignments were held after Nessel said in a “CBS This Morning” interview Friday that over the months of her office’s joint investigation with federal authorities, Whitmer and her family “had been moved around as a result of activities that law enforcement was aware of.”
“We thought it was time to move in before anybody lost their lives,” Nessel said in Friday’s interview.
On Thursday, the FBI announced that it had foiled the alleged plot by men linked to the Wolverine Watchmen group.
State police said that the men had trained together and planned “various acts of violence,” according to The Associated Press.
FBI surveillance took place in August and September, according to a federal affidavit, and four of the men had reportedly planned to meet Wednesday to “make a payment on explosives and exchange tactical gear.”
National