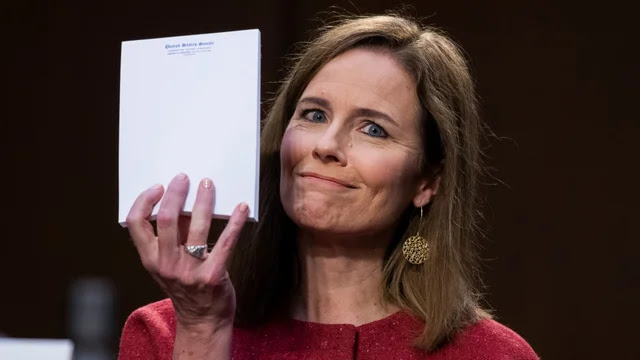 An exchange between Sen. John Cornyn (R-Texas) and Supreme Court nominee Amy Coney Barrett made waves on Twitter after the judge revealed she was answering lawmakers' questions without a single note in front of her.
"You know most of us have multiple notebooks and books and other things like that in front of us. Can you hold up what you've been referring to in answering our questions?" Cornyn asked Barrett.
President Trump's nominee held up a blank notepad and smiled.
"Is there anything on that?" Cornyn asked.
Barrett responded: "Just a letterhead that says United States Senate."
The back-and-forth sparked an audible laugh in the Senate Judiciary Committee chamber and instant reaction on social media, with several conservative pundits and media figures comparing the episode to Democratic presidential nominee Joe Biden's use of notes during his first debate with President Trump.
Republicans have held up Barrett has a highly qualified constitutional scholar and expert in the law, while Democrats have warned she could pose a danger to health care and abortion rights.
Barrett's confirmation hearing is to continue Wednesday and Thursday, with a committee vote on her nomination next week. The full Senate plans to vote on the nomination before Election Day.
National