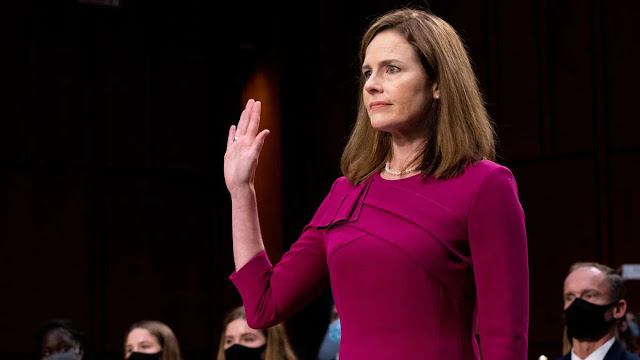 During his questioning of Amy Coney Barrett this morning, Senator Dick Durbin said repeatedly that different lawyers will come to difficult conclusions when examining the same text, and insisted that it is impossible for judges to be the same as “robots.” Amy Coney Barrett agreed.
In and of itself, this was a relatively uncontroversial observation for Durbin to have made. But, as an argument against originalism — and that is what Durbin was driving at, as he himself confirmed — it was extremely weak. That originalism does not always present an easy answer is true. Equally true is that two originalist judges may come to different conclusions. But the idea that either of these facts endorses the alternative approach, which is simply making up the law, is preposterous.
To borrow an analogy: It is possible for two good-faith umpires to disagree as to whether a pitch fell inside of or outside of the strike zone. But to acknowledge this is not to make a case against strike zones per se, and nor is it to undermine the need for clear and unambiguous rules in baseball. As Justice Scalia often pointed out, originalism isn’t infallible, but it is far better than the alternatives. If two judges come to a different opinion using the same framework, fine. If one comes to an opinion by looking at the original public meaning and the other comes to an opinion based on nothing concrete whatsoever, well, that’s not fine.
What Senator Durbin said this morning is that because sometimes the law is unclear, and because sometimes it is tough for judges using an originalist framework to come to a clear conclusion, there should be no such thing as law at all. This is absurd.
Opinion