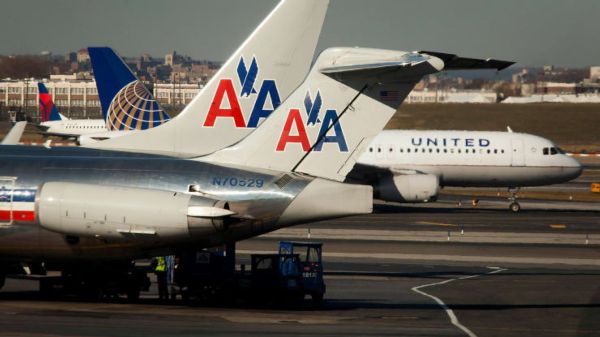 American Airlines and United Airlines announced tens of thousands of job cuts and furloughs in internal memos on Wednesday, though they hinted that some employees could be recalled and see their jobs saved if lawmakers in Washington reach a deal to bail out the nation's airlines.
American Airlines CEO Doug Parker told employees that the process of furloughing 19,000 employees has started and United Airlines CEO Scott Kirby told employees they are moving forward with furloughing about 13,000 employees.
Congress allocated $25 billion in aid for airlines earlier this year under the Payroll Support Program (PSP), part of the massive $2.2 trillion Coronavirus Aid, Relief, and Economic Security (CARES) Act passed in March. However, a clause prohibiting airlines from laying off employees expired Oct. 1.
Airlines have called for another $25 billion to stave off layoffs until at least April by extending the PSP for six months and the companies are continuing to lobby Congress and the White House to include further aid for the industry.
The Trump administration and congressional Democrats are negotiating whether to extend relief to the airline industry, with House Democrats' $2.2 trillion coronavirus relief package unveiled Monday including another $25 billion for airlines.
Though both United and American are planning to apply for further loans from the U.S. government, they say more funding will be necessary to prevent thousands of workers in both companies going jobless.
"Unfortunately, there is no guarantee that any of these efforts will come to fruition," Parker wrote to staff. "However, in an effort to encourage competition and keep hope alive for our team, I informed [Treasury Secretary Steven Mnuchin] that if these efforts to extend PSP are successful over the next few days, we will reverse our furlough processes and recall any impacted team members."
Mnuchin has endorsed extending the PSP and called on Congress this week to do so as part of broader talks over a fifth coronavirus relief bill. Talks over the next relief bill resumed this week between the White House and congressional Democrats but have yet to show any signs of progress.
“In a continuing effort to give the federal government every opportunity to act, we have made clear to leadership in the Administration, Congress and among our union partners that we can and will reverse the furlough process if the CARES Act Payroll Support Program is extended in the next few days. We implore our elected leaders to reach a compromise, get a deal done now, and save jobs,” Kirby wrote to staff.
National