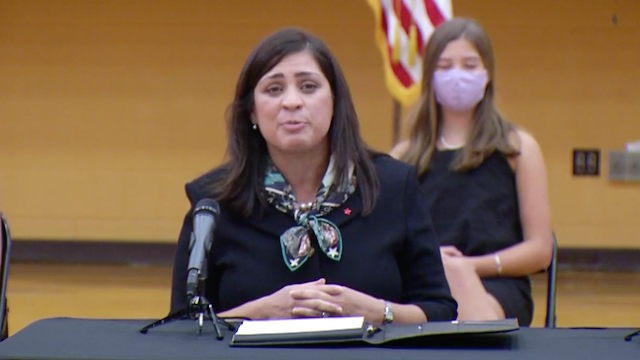 By Bethany Blankley
Gov. Greg Abbott Thursday announced the appointment of Rebeca Aizpuru Huddle, a Republican, to the Texas Supreme Court. Huddle will replace Justice Paul Green, who retired in August.
Abbott and Huddle held a news conference at Stephen F. Austin High School, Huddle’s alma mater, on Thursday.
"Rebeca's story truly represents the American dream,” Abbott said. “She is a first generation American whose tireless work and dedication put her on a path to Stanford and the University of Texas School of Law. Rebeca brings to the court a strong work ethic and sharp legal mind as demonstrated by her extensive and accomplished record both in public service and private practice.”
Huddle was born and raised in El Paso, and received her undergraduate degree from Stanford University. She received her law degree from the University of Texas at Austin, graduating with honors.
She previously served as a justice on the First Court of Appeals in Houston from 2011 to 2017. She retired from the bench in 2017 and is a partner at Baker Botts law firm in Houston, where she practices in the areas of commercial litigation and appeals.
“It is a tremendous honor to serve the people of our state as a justice on the Texas Supreme Court,” Huddle said. “I am deeply grateful for the trust, Gov. Abbott, you have placed in me by appointing me to do this important work.”
She added that her appointment was a special way to end Hispanic Heritage Month.
Huddle is a member of the State Bar of Texas, Houston Bar Association and Mexican American Bar Association of Houston.
Texas