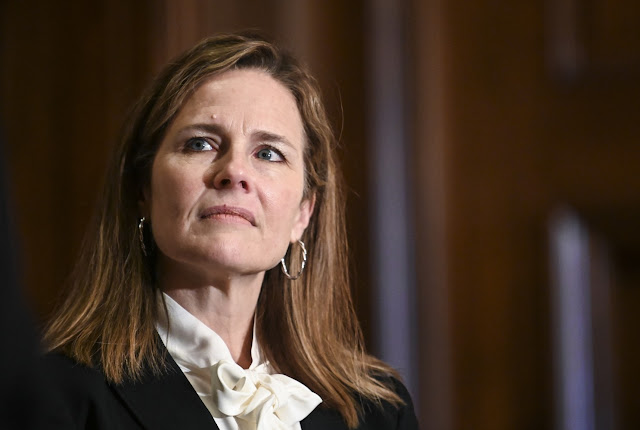 The Washington Post has just published an article that the paper seems to view as a blockbuster, detailing Amy Coney Barrett’s involvement with the Christian charismatic community People of Praise.
This article is only the latest in a series of pieces focusing on People of Praise since Barrett’s name began being floated for the Supreme Court opening. Reporters thus far seem unable to find a more potent way to villainize Barrett than to point out her leadership role in a group whose members, among other nefarious activities, donate 5 percent of their annual income to the community and “meet regularly for spiritual, social, and service projects.”
In their nearly bottomless ignorance of religion, reporters from the Post and other supposedly neutral outlets seem unable to grasp that People of Praise isn’t a misogynistic cult, that the word “handmaid” comes not from Margaret Atwood’s dystopian novel but from the Bible, and that these Christians use the term not to subjugate women but to invoke Mary the Mother of God — the most famous and most revered woman in history.
In other words, the practices and beliefs of People of Praise are neither sinister nor shocking, and Barrett’s purported membership in the group is evidence of little more than her desire to live out her Catholic faith intentionally with the support of a like-minded community.
These attempted hit jobs reveal that almost no one in the national media manages to attain an even somewhat sophisticated understanding of Christianity before reporting or opining on the subject. Routinely, articles such as this one in the Post present the fact that a public figure embraces the basic tenets of Christianity as though this is an earth-shattering and disqualifying revelation. Though the religiously illiterate members of the press might believe otherwise, Barrett’s membership in People of Praise is not proof that she is poised to impose a regressive, anti-science, anti-woman theocracy through her role on the Court.
There is obviously no scandal in any of this — in fact, it should only serve to deepen our understanding of how Barrett came to be such an exemplary person and mother.
The main thing that’s going to be awkward is explaining why there were apparent attempts to hide Barrett’s affiliation with the group: “Numerous references to Barrett and her family that previously appeared on People of Praise’s official website have since disappeared from the site, according to a Post review of versions of the site that are hosted by the Internet Archive.”
If this indeed was a deliberate attempt to obscure her role, it was ill-considered on a couple of levels — it was bound to be found out, and, more fundamentally, there was no reason to do it, since there’s nothing to be embarrassed about.
As for the suggestion underlying all this that Barrett’s role in People of Praise somehow shows that she’s been a willing tool of the patriarchy, it is completely absurd. She’s an incredibly accomplished woman about to ascend to the highest court in the land.
Just think of where Amy Coney Barrett would be now if her husband wasn’t keeping her down in accordance to some ancient sexist religious dogma: Instead of being a “mere” federal appellate judge, professor of law at Notre Dame, and nominee to be a Supreme Court justice, she would have already united all of the nations of earth, built a fearsome space armada, and began her conquest of the known universe.
Opinion