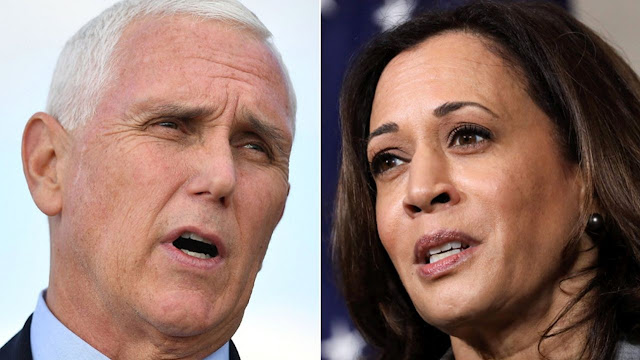 Vice President Pence and Sen. Kamala Harris (D-Calif.) will meet for the first and only vice presidential debate of the 2020 race on Wednesday night, giving them a chance to address a country shaken by a growing White House coronavirus outbreak and President Trump’s hospitalization.
The match-up in Salt Lake City will be moderated by USA Today’s Washington bureau chief, Susan Page, and will be divided into nine segments lasting 10 minutes each. It follows a chaotic first presidential debate a week earlier.
Here are five things to watch in the vice presidential debate:
Harris’s balancing act
Harris will have to walk a fine line on Wednesday, given Trump’s coronavirus diagnosis last week and subsequent hospital stay.
The coronavirus pandemic and Trump’s handling of it will almost certainly be among the most prominent issues to come up during the debate, and it’s a topic that still stands as one of the Trump campaign’s greatest weaknesses — and the Biden campaign’s greatest strengths. Pence, in particular, may be put on the defensive for his role as chairman of the federal coronavirus task force.
That means Harris will be forced into the balancing act of being sympathetic to the president’s still-questionable health while aggressively prosecuting the Biden campaign’s case against the Trump administration.
The vice presidential debate will give Harris a chance to reintroduce herself to the broader public less than a month before Election Day and as millions of Americans are already voting. That, however, comes with the added pressure of having to carefully manage her attacks at a sensitive time in the 2020 campaign.
Pence picks up Trump
Pence is heading into Wednesday night’s debate tasked with cleaning up from Trump’s performance at last week’s presidential debate, which was defined by frequent interruptions and heckling by the president.
The vice president is undoubtedly calmer and more measured in his demeanor than Trump, and if he’s able to project that sense of composure on stage, it could help reassure Republican voters who are reeling from a chaotic week for the president’s administration and campaign.
At the same time, the debate gives Pence an opportunity to get out in front of a massive audience at a time when Trump’s illness has taken him off the campaign trail. That means that, for the time being, Pence will be the standard-bearer of the Trump campaign. But that role comes with some serious pressure, especially considering that Trump will almost certainly be monitoring the debate in quarantine.
Page is stepping into her role as moderator just over a week after millions of viewers saw an at-times exasperated Chris Wallace struggle to control a raucous and chaotic showdown between Trump and Democratic nominee Joe Biden.
Wallace had gone into that debate with the intention of being “invisible,” so as to allow a free discussion between the candidates. But the event quickly went off the rails as Trump interrupted Biden, and Wallace never quite managed to reel the debate back in, becoming himself one of the main storylines of the debate.
Page, on the other hand, will be dealing with two candidates less prone to outbursts or interruptions than either Trump or Biden, making it easier for her to keep the discussion under control. But she’ll still face scrutiny for how she guides the debate, especially after the poor reviews given to last week’s showdown.
Will the safety precautions change the debate?
The Commission on Presidential Debates approved extra safety precautions for Wednesday’s debate after Trump and several of his aides and allies tested positive for the coronavirus, announcing that Pence and Harris will be seated 13 feet apart from one another and that a plexiglass barrier will be used to separate the two candidates as well as the moderator.
Harris’s team pushed the safety measures, while Pence’s team opposed them. A spokesperson for Pence jabbed at Harris for the plexiglass barrier request, saying, “If Sen. Harris wants to use a fortress around herself, have at it.”
While the plans have the support of the Cleveland Clinic, which is helping set protocols for the debates, it’s unclear how the new safety measures will impact the optics and tone of the forum. The candidates will be seated rather than standing, and the extra distance and physical barriers may make for a calmer, less intense experience.
Can this debate change anything?
Last week’s presidential debate didn’t do Trump or Republicans any favors. In the week since then, Biden has opened up his widest national lead in months, with FiveThirtyEight’s polling average showing the former vice president with a nearly 9-point advantage over Trump.
Trump’s dwindling polling numbers put more pressure on Pence to change the trajectory of the race than Harris. With Election Day now less than one month away, Trump and Pence have fewer and fewer opportunities to stage a comeback, while Harris and Biden only need to keep things steady.
But it’s unclear how much the debate can actually do to shake up the state of the race. Typically, the first presidential debate draws the largest audience, while vice presidential debates tend to draw a somewhat smaller viewership. In 2016, for example, the first debate between Trump and then-Democratic nominee Hillary Clinton drew a record 84 million viewers. On the other hand, the debate between Pence and Clinton’s running mate, Sen. Tim Kaine (D-Va.), drew an audience of about 37 million.
That’s not to say that 2020 won’t be different. But Trump and Pence need a game changer, and it’s unclear if the debate will give them that.
National