9 arrested in France in connection with teacher beheading 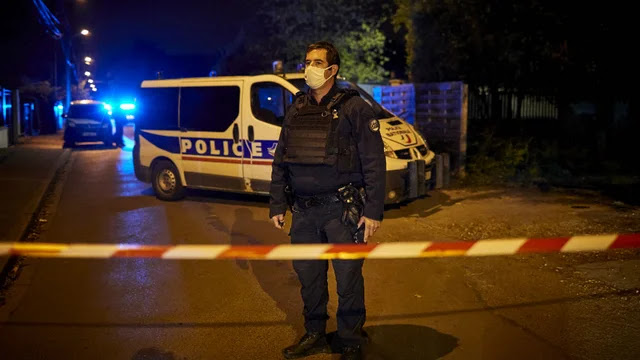 French police on Saturday have nine people in custody after a high school teacher was decapitated in a Paris suburb in what authorities have called a possible terrorist attack, Reuters reported.
Samuel Paty, a 47-year-old history history, was attacked around 5 p.m. local time on Friday in broad daylight near a school in the northwest Paris suburb of Conflans-Saint-Honorine.
Police shot and killed the attacker shortly after the beheading. Reuters reported that investigators are trying to determine if the attacker, reportedly an 18-year-old of Chechen origin, had acted alone or had accomplices.
Police sources told the outlet that four relatives of the attacker, including a minor, were detained in the immediate aftermath of the attack.
Five more people were detained overnight, including two parents of pupils at the College du Bois d’Aulne where Paty worked.
Earlier this month, Paty had shown his students cartoons of the Prophet Mohammad in a civics class on freedom of expression., which had reportedly upset some Muslim parents.
One man who said his daughter was in Paty’s class had reportedly recorded a video and posted it to social media calling the teacher a “thug” and calling for other parents to “join forces and say ‘stop, don’t touch our children.’”
Reuters noted that it is unclear whether that parent was one of the people currently in police custody.
The country's national anti-terror prosecutor opened an investigation for "murder in connection with a terrorist enterprise" and "criminal terrorist association" regarding the educator's killing.
The shocking incident came around the same time as the historic trial of 14 alleged accomplices in the January 2015 deadly attack on Charlie Hebdo, which is notorious for being targeted following the publication of caricatures of the prophet.
Last month, Charlie Hebdo editors commemorated the legal trial's start by reprinting the caricatures that sparked the attack.
Two people were stabbed outside the former Paris office of Charlie Hebdo just weeks after the reprinting, with authorities later saying the recent killings were a plot to attack the newspaper a second time.
World