2020 election already most expensive ever 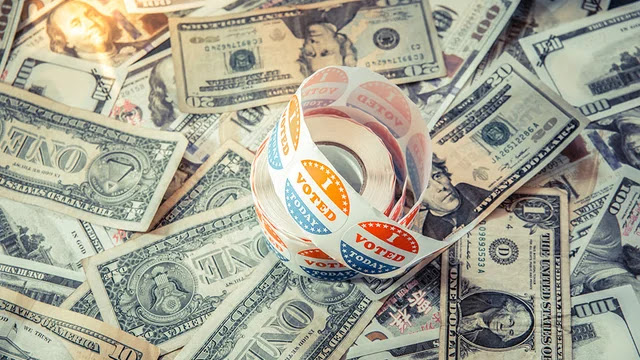 Candidates, outside groups and political parties have already spent more money on the 2020 election than on any previous election cycle, and billions more will be spent in just the next three weeks.
Reviews of Federal Election Commission data, state-level spending and planned television advertising show total spending has already eclipsed the $7 billion spent on the 2016 elections. And by the end of the year, the total spent on federal elections alone is likely to near $11 billion, according to an estimate from the Center for Responsive Politics.
The total spending is likely far higher, because campaign finance reports have only been filed through the end of September.
President Trump, former Vice President Joe Biden and their various allies are likely to spend more than $5.1 billion fighting for the White House, the center projects, more than double the cost of the 2016 contest and nearly $2 billion more than the most expensive presidential race ever, in 2008.
“The 2018 election smashed fundraising records for midterms, and 2020 is going to absolutely crush anything we’ve ever seen — or imagined — before,” Sheila Krumholz, who heads the center, said in a statement. “This is already the most expensive presidential election in history and there are still months of election spending to account for.”
Trump’s campaign had raised nearly half a billion dollars through the end of August, and the Republican National Committee and various joint fundraising committees have piled on hundreds of millions more.
Biden’s campaign and the Democratic National Committee, fueled by a tsunami of small-dollar donors, raised $383 million in September alone, topping a record set in August of $364 million.
Those small-dollar donors have smashed records for both Democratic and Republican candidates. But the fundraising surge has been especially pronounced for Democrats, who raised almost $1.5 billion through their main online platform, ActBlue, in just the last three months.
The Republican answer to ActBlue, WinRed, reported pulling in $620 million over the last three months, an impressive sum for a group that only launched last year.
The eye-popping spending extends well beyond the presidential contest. Seven of the 10 most expensive U.S. Senate contests ever are happening this year — in North Carolina, Iowa, Arizona, Montana, Maine, South Carolina and Georgia, according to data collected by Advertising Analytics, a nonpartisan firm that keeps tabs on television and digital spending.
Five Democrats running for U.S. Senate seats raised more than $20 million each over the last three months, led by Jaime Harrison, the former chairman of the South Carolina Democratic Party who pulled in $57 million. Five others raised more than $10 million.
While small-dollar donors are playing an expanded role this year, big donors are doing their part to keep up. Former New York City Mayor Michael Bloomberg has pledged more than $100 million in spending for Biden and Democratic causes. Former hedge fund manager Tom Steyer, who spent hundreds of millions on his quixotic presidential campaign, has spent another $56 million, according to FEC data analyzed by Political MoneyLine.
Republican billionaires Richard and Elizabeth Uihlein and Sheldon and Miriam Adelson have each spent more than $50 million on conservative causes.
New records are being set at the state level, too, where interest groups and big donors are funding ballot measure campaigns to an unprecedented degree.
Initiatives on the ballot in California have drawn more than half a billion in spending, led by Proposition 22, an initiative that would classify app-based drivers and delivery workers as independent contractors.
Tech giants Uber, Lyft and DoorDash have contributed $184 million to the campaign so far, while labor unions have dumped more than $10 million in opposition. It is the most expensive ballot measure campaign in American history.
Just two men, Illinois Gov. J.B. Pritzker (D) and Ken Griffin, the billionaire founder of the hedge fund Citadel, have fought a multimillion-dollar battle over a proposed constitutional amendment that would allow the state to implement a graduated income tax. The two sides have collected a combined $107 million, almost all of it from Pritzker and Griffin.
Three other California ballot initiatives have attracted more than $50 million in spending. In Alaska, where only a few hundred thousand people will vote, oil companies have dropped more than $18 million into a campaign against a measure that would raise taxes on oil production on the North Slope.
Though the spending is unprecedented, it is still only a tiny fraction of the amount of money Americans spend every year. Americans have already spent more than $11 billion on spectator sports through the first half of this year, according to the U.S. Census Bureau, and more than $12 billion on dry cleaning and laundry services.
National