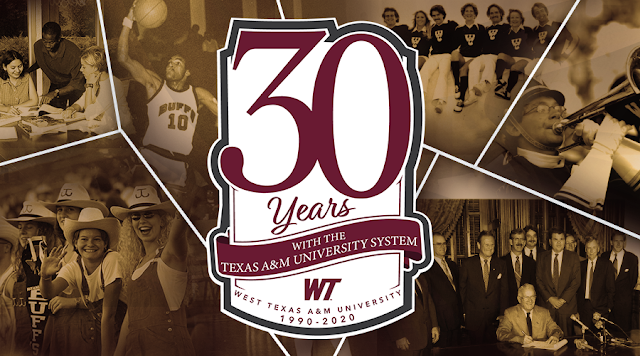 Panhandle history was made 30 years ago when the then-West Texas State University formally merged with the Texas A&M University System.

To commemorate the merger, WT will celebrate its history throughout September, including launching wtamu.edu/30Years, a repository of historical photos, remembrances and congratulations from significant figures during the merger and today’s statewide leaders.

“The growth in enrollment, construction of new campus facilities and the outstanding academic offerings have positioned WT to achieve a bold vision for the future,” University President Dr. Walter Wendler said.

“In our long-range plan, WT 125: From the Panhandle to the World, we have made a commitment to continue to serving our region, the families, community members and prospective students in a unique way,” Wendler said. “Hard work and dedication will help us reach our goal of becoming a first-of-its-kind regional research university.”

The name changed again in 1963, switching “College” to “University.” Then, 25 years later, momentum began building to ally WT with a larger university system with a broad, statewide reach.

“We were in a position at that time where the small, independent college was really becoming a dinosaur in Texas,” said State Rep. John Smithee (R-Amarillo), a 1973 WT alum. “They didn’t have the resources to compete for appropriations in the Legislature because these other systems had full-time lobbyists. As a legislator, I was seeing how hard it was for independent schools to compete.”

The University of Texas System was floated as a possibility, as was Texas Tech University, at least briefly, though it had not yet formally become a university system.

“But as this went on, it became apparent that WT and A&M just had a lot in common,” Smithee said. “And with their resources and programs and access, for the long-term future of WT, it would be so much better to be a part of a system like that.”

The University also has established, in the past three decades, the College of Nursing and Health Sciences, the School of Music, the College of Engineering, and the Center for Learning Disabilities, as well as new programs in agricultural media and in civil and environmental engineering, master’s degree programs in education and social work, and doctoral degree programs in agriculture and educational leadership. Most recently, the 2 + 2 program was announced that allows A&M Veterinary students to begin their first two years of medical training at WT for increased exposure to large animal needs in rural communities.

“The Texas A&M University System gained the Panhandle’s premiere institution of higher education when you joined in 1990,” Sharp said. “Through our partnership, WTAMU has continued to grow and prosper, serving the hard-working men and women who call the Texas Panhandle their home. Thanks to our partnership, the future of WT and the Panhandle has never looked brighter.”