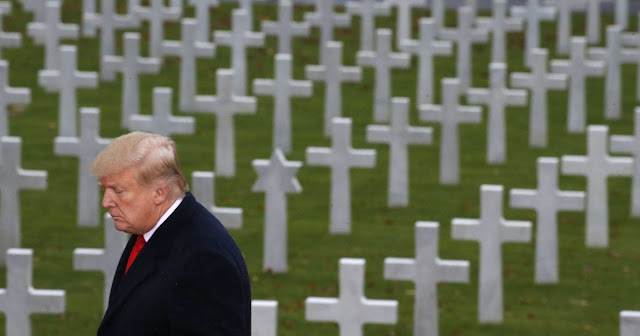 Former and current White House officials angrily denied a report that President Trump disparaged American war dead, saying instead that he was “livid” that bad weather meant he could not visit a French cemetery for U.S. soldiers killed in World War I.

The controversy stems from 2018, when Trump was expected to lay a wreath at Aisne-Marne American Cemetery and Memorial, a trip abandoned at the last moment on the grounds that heavy rain made conditions unsuitable for helicopter travel.

On Thursday, the Atlantic, citing unnamed former officials, claimed the trip was canceled by the president because he feared his hair would become disheveled in the rain and dismissed the fallen soldiers as “losers.”

However, three officials said the decision was made by aides following well-established safety protocols, and several rubbished the idea that Trump would disparage American war dead.

Another supplied an email that appeared to show a "bad weather call" had been made. The authenticity of the image could not be immediately verified, but it chimed with other accounts of the day's events.

"I was with the President in Paris, France when there was a bad weather call for the helo lift to the Aisne-Marne American Cemetery," said Dan Scavino, White House director of social media. "There is literally not one thing 'reported' from France that is accurate or true, 100% complete lies! This is a politically motivated hit piece, on the President of the United States, 60 days before a presidential election. A total disgrace!!"

Stephen Miller, senior adviser to the president who was on the trip to France, said the Atlantic story was a “despicable lie.”

“The president deeply wanted to attend the memorial event in question and was deeply displeased by the bad weather call,” he told the Washington Examiner.

“The next day, he spoke at Suresnes American Cemetery in the pouring rain and refused an umbrella," he added. “No one has a bigger, more loving, or more loyal heart for American veterans and fallen heroes than our president.”

A senior executive for the Atlantic dismissed the criticism.

“We stand behind our reporting," said Adrienne LaFrance, the Atlantic's executive editor.

The story, written by the magazine’s Editor-in-Chief Jeffrey Goldberg, claims that after canceling the visit to mark the 100th anniversary of the end of World War I, Trump asked his aides: “Why should I go to that cemetery? It’s filled with losers.”

In another conversation, Trump reportedly said that the 1,800 marines who were killed in the nearby battle of Belleau Wood were “suckers” for losing their lives.

But a former senior White House official, who was also on the trip, said there was no truth to the story.

“I was next to the president the whole day being his personal aide, and I can tell you he was disappointed when he was told by a staffer that he was unable to helicopter,” he said.

“There were no disparaging comments about the military, people who had lost their lives," he said. “He was just disappointed. He knew the gravity of what it meant to go visit it.”

Another senior administration official said the president was “livid” when he was told by his then-deputy chief of staff Zach Fuentes about the “bad weather call.”

“It’s based on a set of algorithms that they use and meteorological analysis — and that’s not a decision made by political staff, it’s made primarily by the military, although there’s some role for the deputy chief of staff,” he said.

He added that his visit the next day to Suresnes American Cemetery, just outside Paris, revealed a truer picture.

A senior military officer assigned to the National Security Council said the reporting did not tally with a commander in chief who treated troops with respect and warmth.

“He has nothing but compassion, care, and love for these service members,” said the officer, who described how he went to great lengths to keep personnel out of danger.

“I was with him several times when he made those phone calls to families of people who had fallen. He read about them, he wanted to know about them, he asked questions," the officer added.

“It made him uncomfortable because of how sad of a situation it was. But it had nothing to do with any disdain. It was all from a place of compassion.”