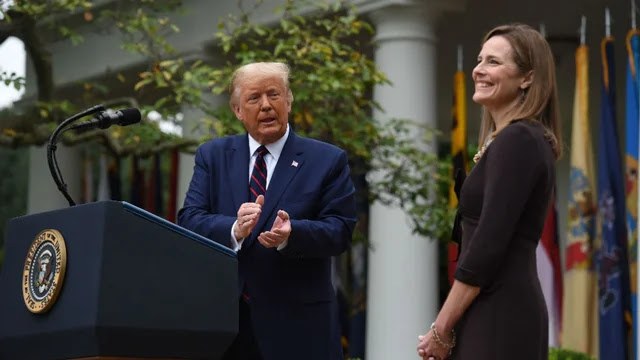 President Trump on Saturday officially nominated Judge Amy Coney Barrett to fill the late Justice Ruth Bader Ginsburg’s seat on the Supreme Court, revealing his choice at a Rose Garden ceremony and kicking off a sprint to get the conservative judge confirmed before Election Day.
It was widely reported on Friday night that Barrett was Trump's choice for the vacancy, taking some of the drama out of the president's formal announcement. Now the focus shifts to a looming confirmation fight that is expected to conclude with Barrett becoming the youngest member of a 6-3 conservative majority court.
Barrett, 48, a Trump-appointed federal appeals court judge and former professor at Notre Dame Law School, her alma mater, was seen by anti-abortion activists and White House allies as a trusted choice to tilt the court right and energize Trump’s conservative Christian supporters.
She was viewed as an immediate favorite to replace Ginsburg having already gone through the vetting process in 2018 when Trump ultimately nominated Brett Kavanaugh to replace former Justice Anthony Kennedy. Trump previously told allies that he was “saving” Barrett as a nominee to replace Ginsburg, Axios reported in 2019.
Administration officials and outside conservative groups felt a sense of familiarity with Barrett and her views and believed she'd be a reliably conservative vote on the court, according to sources familiar with the selection process, making her the preferred pick among many White House allies.
The president met with Barrett, a mother of seven, at the White House earlier in the week.
Barrett edged out Judge Barbara Lagoa, a Trump appointee to the 11th Circuit Court of Appeals, who was viewed as the only other serious contender and was pushed by a number of the president’s allies in Florida, a critical swing state in this year’s election. But Lagoa’s lack of a judicial record on abortion in particular worried some close to the White House, and Barrett’s conservative bona fides ultimately won out.
A former clerk for late Supreme Court Justice Antonin Scalia, Barrett was nominated by Trump and confirmed in a 55-43 vote by the Senate to serve on the U.S. Court of Appeals for the 7th Circuit in 2017. At the time, three Democratic senators supported her nomination: Joe Donnelly (Ind.), who subsequently lost his 2018 reelection bid, Tim Kaine (Va.) and Joe Manchin (W.Va.).
Barrett became something of a favorite in conservative circles during her 2017 confirmation hearing, when Sen. Dianne Feinstein (D-Calif.) raised concerns about the judge’s Catholic faith factoring into her rulings. The senator at one point told Barrett, “The conclusion one draws is that the dogma lives loudly within you” — an epithet that some conservative Catholics went on to wryly embrace, printing the phrase on tee shirts and coffee mugs.
“On the side of conservatives, people are going to be thrilled by this pick,” said Carrie Severino, president of the conservative group Judicial Crisis Network. “There’s a lot of people who have been so impressed by and in love with Amy really since her first confirmation process when they saw the grace under pressure with which she handled Sen. Feinstein’s attacks on her faith.”
Ginsburg, who died last week from cancer at age 87, was a reliably liberal vote who in many respects stands to be replaced by her ideological opposite. If confirmed, Barrett is seen as likely to lend a sympathetic audience to legal challenges targeting abortion rights, the scope of federal agencies and the Affordable Care Act, President Obama’s sweeping health care law, which faces another GOP-led challenge during the court’s upcoming term.
Democrats fear a rightward shift on the court could radically reshape the lives of millions of Americans. With a 6-3 conservative majority in place, even relatively stable areas of law — like race relations, voting rights and environmental regulatory power — could be upended, giving conservative activists a chance to reverse liberal gains and cement their own legal agenda for years to come.
Conservative groups are expected to flood the airwaves with ads and rally grassroots support to confirm Barrett. Trump has said he hopes to have Barrett confirmed before Election Day, setting up an ambitious timeline to pack in confirmation hearings and a final vote by Nov. 3.
But with just five weeks until the 2020 election, Trump’s selection of Barrett also carries political risk: Placing a staunch conservative in the seat long occupied by Ginsburg, a liberal icon, may stoke the country’s partisan culture war, heighten Democrats’ concerns over an imminent rollback of hard-won legal advances and alienate some of the country’s more moderate voters.
National