Trump: Schools teaching 1619 Project in curriculum 'will not be funded' 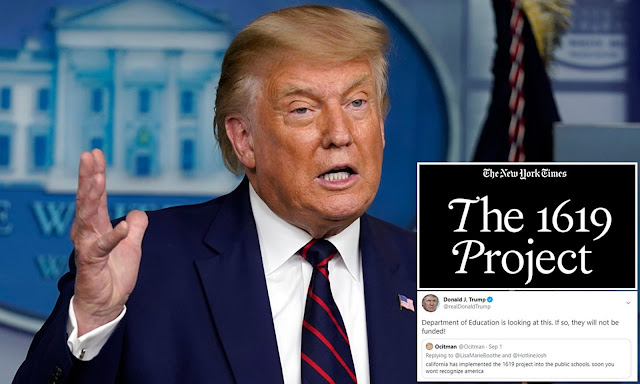 President Trump threatened to redirect funds away from public schools teaching an alternative view of U.S. history based on slavery.

In a Sunday morning tweet, Trump said the Education Department would investigate schools that seek to integrate the 1619 Project, an ongoing New York Times Magazine project that argues the American founding began the year the first slaves were sold to British colonists, rather than 1776, the year the United States declared independence.

"Department of Education is looking at this.If so, they will not be funded!" Trump said in response to a tweet that lamented the project being "implemented" into California public schools.

The project was founded by opinion writer Nikole Hannah-Jones and was selected for the 2020 Pulitzer Prize for commentary. However, it was widely criticized by historians as riddled with inaccuracies, including the assertion that the Revolutionary War was an effort by colonists to preserve slavery rather than declare independence from the British monarchy.

In a reaction to Trump's tweet, Hannah-Jones decried the announcement as "threatening to investigate schools for teaching American journalism."

"Do those concerns about cancel culture and McCarthyism and censorship only apply to the left or do they apply to the POTUS threatening to investigate schools for teaching American journalism? Silence is deafening here," the project founder tweeted.

White House Office of Management and Budget Director Russell Vought announced on Friday that Trump ordered him to ensure federal agencies no longer taught or conducted training on "critical race theory," a left-wing academic theory criticized for a variety of reasons by scholars, including its rejection of classical liberal thought.

"The President has directed me to ensure that Federal agencies cease and desist from using taxpayer dollars to fund these divisive, un-American propaganda training sessions," the announcement said.

"In the meantime, all agencies are directed to begin to identify all contracts or other agency spending related to any training on 'critical race theory,' 'white privilege,' or any other training or propaganda effort that teaches or suggests either (1) that the United States is an inherently racist or evil country or (2) that any race or ethnicity is inherently racist or evil," the announcement added. "In addition, all agencies should begin to identify all available avenues within the law to cancel any such contracts and/or to divert Federal dollars away from these un-American propaganda training sessions."