Trump says he'll spend own money on campaign if necessary 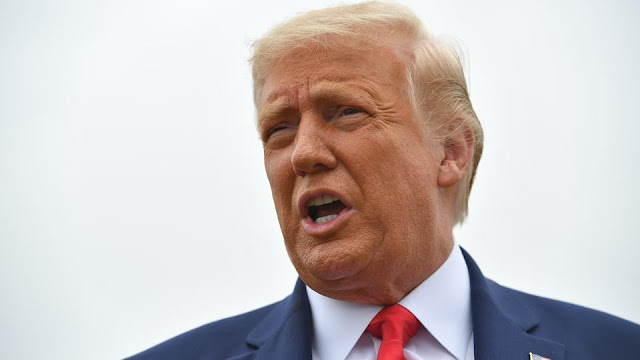 President Trump said Tuesday that he would spend his own money on his reelection campaign if it were necessary, while downplaying the need for it at this stage.

“If I have to, I would, but we’re doing very well,” Trump told reporters at Joint Base Andrews before departing for a two-state trip to Florida and North Carolina.

The president claimed that his campaign needed to “spend more money up front” to combat what he described as “disinformation” put forth by Democrats and the press about his administration’s handling of the novel coronavirus.

“If we needed any more, I would put it up personally, like I did in the primaries last time,” Trump told reporters, referring to the money he put up for his 2016 campaign. “If I have to, I’ll do it here but we don’t have to because we have double and maybe even triple what we had a number of years ago, four years ago.”

Asked how much of his own money he would consider putting into the campaign, Trump replied: “Whatever it takes, we have to win.”

The president’s remarks come amid reports about concerns within his campaign about a potential cash crunch two months from the election. Bloomberg reported earlier Tuesday that Trump had discussed spending up to $100 million of his own money on his 2020 campaign.

The Trump campaign and Republican National Committee built a significant war chest but have spent $800 million on the president’s reelection effort through the month of July. Meanwhile, the Biden campaign has spent over $400 million and nearly matched the Trump campaign in cash-on-hand at the end of July. The campaign and the Democratic National Committee reported last week that they raised a record $365 million in August, the largest-ever one-month fundraising haul.

The New York Times reported Monday that the Trump campaign was grappling with a potential cash crunch as the November 3 election nears. The Trump campaign and RNC have yet to announce their fundraising numbers for last month, though they have disclosed that they raised $76 million during the GOP convention alone, more than the Democrats.

Meanwhile, Trump campaign manager Bill Stepien told reporters that he is “carefully managing the budget” and that the campaign is confident funding will not be an issue down the final stretch.

Earlier Tuesday, Trump defended his campaign spending, tweeting that he needed to spend “a lot of money” in order to “compensate for the false reporting and Fake News concerning our handling of the China Virus,” referring to the novel coronavirus pandemic.

Trump is heading to Jupiter, Fla., on Tuesday to deliver remarks on his environmental policies and will headline a campaign event in Winston Salem, N.C., later in the evening. Both states are key battlegrounds in the 2020 election.