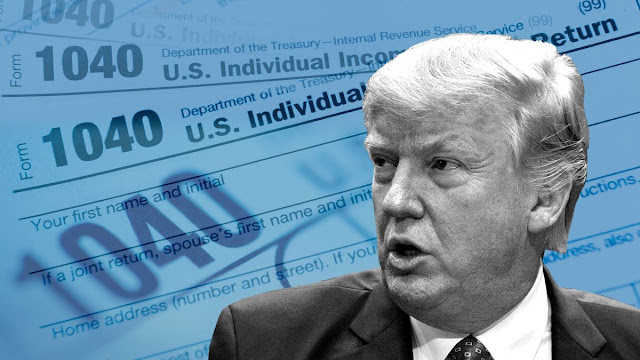 President Trump paid no income taxes for 10 of the 15 years before he was elected president, and just $750 a year in 2016 and 2017, according to The New York Times, which obtained the president's tax information for the last 20 years.
The Times found that Trump faces hundreds of millions of dollars in debt and struggling Trump Organization properties and that he has taken advantage of a number of write-offs to avoid paying taxes.
In a statement to the Times, Trump Organization lawyer Alan Garten said that "most, if not all, of the facts appear to be inaccurate" and reportedly took issue with the amount of taxes the Times reported that Trump has paid.
"Over the past decade, President Trump has paid tens of millions of dollars in personal taxes to the federal government, including paying millions in personal taxes since announcing his candidacy in 2015," Garten told the Times.
Trump himself also denied the Times's reporting during a press conference on Sunday, calling the story "totally fake news."
"The IRS does not treat me well. They treat me like the Tea Party," he continued, referring to claims from GOP figures that the IRS targeted GOP-leaning groups during the Obama administration.
The bombshell Times report revealed that the president faces payments on more than $300 million in loans that will become due in the next few years, while revenue from his time hosting "The Apprentice" on NBC has mostly dried up, and he has largely sold his stock portfolio.
Trump reportedly made hundreds of millions of dollars from his work and related licensing on “The Apprentice" over the years, which was apparently invested back into Trump Organization businesses. But the Times analysis of Trump’s finances finds those businesses have continued to lose millions, resulting in Trump avoiding payments on income taxes while earning millions from “The Apprentice” due to losses at other businesses.
The Times reports that Trump’s tax records show $47.4 million in losses in 2018, despite Trump announcing in a financial disclosure that he made at least $434.9 million.
Other details revealed by the Times include that the Miss Universe pageant was most profitable under Trump and generated $2.3 million for him as a co-owner of the pageant.
Trump Organization tax records also show, according to the Times, that between 2010 and 2018, it wrote off around $26 million in unexplained “consulting fees.” The consulting fees claimed as tax deductions for hotel projects in Vancouver and Hawaii match the payments Ivanka Trump reported, more than $747,600, from a consulting company she co-owned, according to the Times.
Also revealed in Sunday's report was the at least partial scope of Trump's overseas dealings, long a target of government ethics organizations due to concerns that foreign investors could seek to curry favor with the president through his businesses. At least $73 million was made abroad by the Trump Organization during the first half of Trump's term, according to the documents.
The Times reports that while Trump paid just $750 in income taxes in the U.S. in 2017, Trump or his companies paid more taxes in other countries, including $15,598 in Panama, $145,400 in India and $156,824 in the Philippines.
House Ways and Means Committee Chair Richard Neal (D-Mass.), whose panel has been fighting for years to obtain the president's tax returns, said in a statement that Trump "gamed the tax code to his advantage and used legal fights to delay or avoid paying what he owes."
"Today’s report underscores the importance of the Ways and Means Committee’s ongoing lawsuit to access Mr. Trump’s tax returns and ensure the presidential audit program is functioning effectively, without improper influence," he said.
Rep. Bill Pascrell (D-N.J.), the chair of the House Ways and Means Subcommittee on Oversight, said the Times' findings "reveal absolutely staggering theft by Trump before and while he has been in office," and that "Trump must release his tax returns as is longstanding practice and is required by law to Congress instead of grandstanding and attacking the media."
At a press conference Sunday, Trump sought to cast doubt on the reporting and suggested that he would release his returns when he no longer faces federal audit, a claim he has made since the 2016 election.
"It's under audit. They've been under audit for a long time," he said Sunday.
National