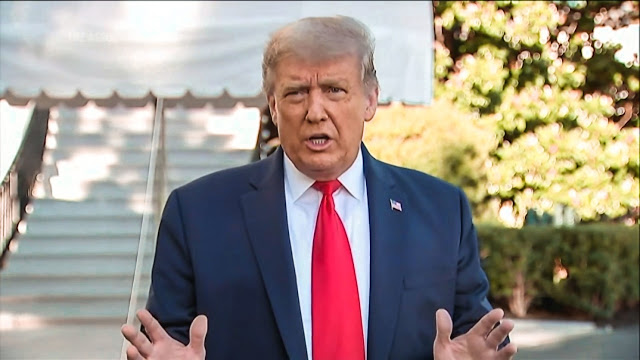 President Trump plans to announce his nominee to replace the late Justice Ruth Bader Ginsburg on the Supreme Court on Friday or Saturday, he said in an interview on “Fox & Friends” Monday morning.
“I think it'll be on Friday or Saturday,” Trump said when asked when he would announce his decision, adding that he wanted to “pay respect” to Ginsburg, who died Friday due to complications from pancreatic cancer, by waiting until after her funeral services.
Trump also said that he had narrowed his list down to five potential nominees. Trump has already committed to choosing a woman to replace Ginsburg on the Supreme Court.
Judges Amy Coney Barrett, Barbara Lagoa and Allison Jones Rushing are among the individuals Trump is weighing as potential nominees. Barrett and Lagoa are said to be top contenders for the role.
Trump on Monday did not specifically name the individuals whom he is considering to replace Ginsburg, but he described them all as “highly qualified” and “very smart.” At one point, he also appeared to reference Rushing, saying that one of the potential nominees is 38 years old — Rushing's age.
“It could be any one of them — they’ll all be great,” Trump told the Fox News hosts.
Trump also said during the phone interview that he would prefer a nomination vote be taken before Election Day on Nov. 3, saying that there would be "plenty of time" for his choice to move through the process.
"I think it should go very quickly. We have a lot of time," Trump said. "Especially if the people we’re talking about, most of them are young and they’ve gone through the process pretty recently."
Details surrounding services for Ginsburg solidified later Monday. A Supreme Court spokesperson said that the late justice will lie in repose on Wednesday and Thursday at the top of the court's steps, following a private ceremony inside the corridor. House Speaker Nancy Pelosi (D-Calif.) also announced that Ginsburg will lie in state at the Capitol's National Statuary Hall on Friday.
A funeral service and burial at Arlington National Cemetery is expected sometime later in the week.
Should Trump follow through in announcing his nominee on Friday or Saturday, the news would come just days before the first presidential debate between the incumbent president and Democratic nominee Joe Biden.
Barrett, 48, is a former clerk for the late Supreme Court Justice Antonin Scalia. Trump nominated her to serve on the U.S. Court of Appeals for the 7th Circuit in 2017. Lagoa, a 52-year-old Cuban American judge and Florida native, was nominated by Trump to serve on the U.S. Court of Appeals for the 11th Circuit at the end of 2019. Both women were confirmed in bipartisan votes by the Senate.
Rushing was nominated by Trump to serve on the U.S. Court of Appeals for the 4th Circuit in 2018 and was confirmed in a party-line vote the following year.
The Supreme Court confirmed Ginsburg’s death Friday evening, a development that immediately injected uncertainty into the presidential election, which is less than two months away, and ignited debate about whether and how swiftly Republicans should move to fill the empty seat on the high court.
Most Republicans have thus far united behind Senate Majority Leader Mitch McConnell (R-Ky.) in saying that Trump’s nominee should get a vote on the Senate floor. However, Sens. Lisa Murkowski (R-Alaska) and Susan Collins (R-Maine) have said that they oppose moving forward with a vote before Election Day.
McConnell refused to hold a vote for then-President Obama’s nominee, Merrick Garland, to replace Scalia in 2016 because it was during an election year. McConnell argues that the circumstances in 2020 are different, because the same party controls the White House and Senate.
National