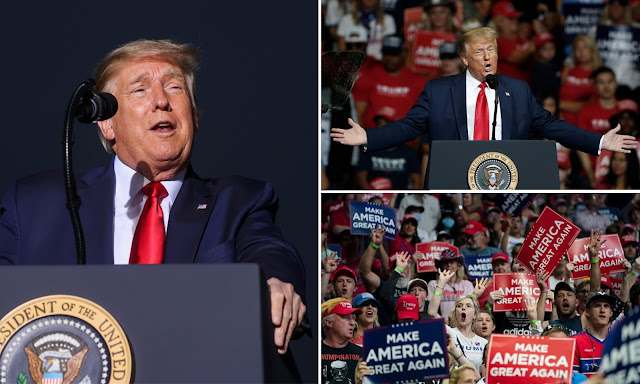 The Trump campaign defended its plans to hold an indoor rally in Nevada on Sunday amid criticism from city officials and others on social media.
The president is set to appear Sunday in Henderson, Nev., at a facility owned by Xtreme Manufacturing for an event that is expected to violate the city's rules against indoor gatherings of more than 50 people. City officials have already warned the company, according to CNN, that the event could result in a fine of $500 or a suspension of the business license.
"The City of Henderson has issued a compliance letter and verbal warning to the event organizer that the event as planned would be in direct violation of the governor's COVID-19 emergency directives. Specifically, gatherings of more than 50 people in a private or public setting is prohibited," a city official told CNN.
"Large live events must be approved by the Nevada Department of Business and Industry, Division of Industrial Relations and at this time, the City has not been notified that this event has been approved. The City may assess a fine of up to $500 per violation of the governor's directives as well as suspend or revoke the business license," they added.
A Trump campaign spokesman fired back.
"If you can join tens of thousands of people protesting in the streets, gamble in a casino, or burn down small businesses in riots, you can gather peacefully under the 1st Amendment to hear from the President of the United States," Trump campaign spokesman Tim Murtaugh told reporters.
Campaign officials added that all attendees would be provided masks and "encouraged" to wear them. All guests would also be subject to temperature screenings, according to the campaign.
The campaign faced criticism from some on social media over the event, which comes as Nevada has seen its numbers of new COVID-19 cases per day drop in recent weeks, though the state is still reporting more than 100 new cases per day.
The Trump campaign has been holding outdoor rallies since a controversial indoor rally in Tulsa, Okla., in June.
National