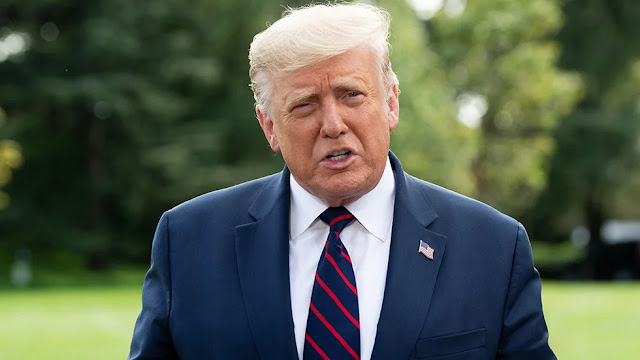 President Trump on Wednesday shook up the high-stakes debate over coronavirus relief, undercutting the Republicans' long-held position by urging GOP leaders to go big.
Senate Republicans had initially offered a $1.1 trillion emergency aid package, but subsequently voted on a proposal providing just $650 billion — only $350 billion of it in new funding.
Democrats have howled at the GOP’s “emaciated” offer, arguing that it falls far short of the funding needed to address the dual health and economic crises caused by the deadly coronavirus.
On Wednesday morning, Trump stunned Washington by joining those Democratic critics in calling for Republicans to seek much more funding than they’ve previously proposed. He suggested it would not only provide relief to those struggling, but would also stimulate the domestic economy at large.
“Go for the much higher numbers, Republicans, it all comes back to the USA anyway (one way or another!),” Trump tweeted.
Judging by the immediate reaction of Senate Republicans, it appeared Trump did not tell his congressional allies that his change of position was forthcoming.
Sen. John Thune (S.D.), a member of GOP leadership, quickly warned that a stimulus package in the range of $1.5 trillion — which a group of centrist lawmakers from both parties proposed this week — would likely lead to "heartburn" among Republicans on Capitol Hill.
"If the number gets too high, anything that got passed in the Senate will be passed mostly with Democrat votes and a handful of Republicans," Thune told reporters in the Capitol. "So it's gonna have to stay in a, sort of, realistic range, if ... we want to maximize, optimize the number of Republican senators that will vote for it."
But another member of GOP leadership, Sen. Roy Blunt (Mo.), indicated he was hopeful for an agreement before the Nov. 3 election.
“I think there is a deal to be had here,” Blunt said. “My concern is that the window closes probably at the end of this month. We need to get busy finding out what we can all agree on. I think the number is gonna be higher than our trillion dollars.”
Minutes after Trump's tweet, White House chief of staff Mark Meadows, a key negotiator, said he was more “optimistic” about a potential for a deal than he had been in quite some time.
"If the Speaker is willing to stay in, I'm willing to stay in, the secretary is willing to stay in" and negotiate, Meadows said during an appearance on CNBC, referring to Treasury Secretary Steven Mnuchin.
Meadows, a former leader of the conservative House Freedom Caucus, characterized the $1.52 trillion relief plan proposed by the bipartisan Problem Solvers Caucus a day earlier as a “thoughtful suggestion” and said it has moved the needle, even as allies of Speaker Nancy Pelosi (D-Calif.) had panned it as insufficient.
"It provides a foundation for us to come back to the table. ... It's not a show stopper,” said Meadows, who noted that he had been briefed on the Problem Solvers plan.
Meadows added that a deal would need to happen within a “week to 10 days” in order for the parties to pass a relief package before Election Day.
The president also took a shot at Democrats in his tweet on Wednesday, falsely accusing them of opposing a new round of stimulus checks for individual families.
“Democrats are ‘heartless’. They don’t want to give STIMULUS PAYMENTS to people who desperately need the money, and whose fault it was NOT that the plague came in from China,” he said.
The Democrats’ $3.4 trillion HEROES Act had included that provision, and party leaders continue to press for those payments in whatever deal might emerge in the coming weeks.
The ultimate impact of Trump’s new message remains to be seen. After the bipartisan talks fell apart almost a month ago, the sides have remained roughly $1 trillion apart, with neither party giving any significant ground. And with the House scheduled to recess on Oct. 2 for the final campaign stretch, the prospects of a bipartisan deal before the elections have grown dim.
Pelosi has stood firm in recent weeks, saying Democrats won’t accept any package lower than $2.2 trillion. And in an appearance on MSNBC Wednesday morning, the Speaker amplified that message.
"We have come down," Pelosi said. "But the needs of the American people — we can only go so far."
National