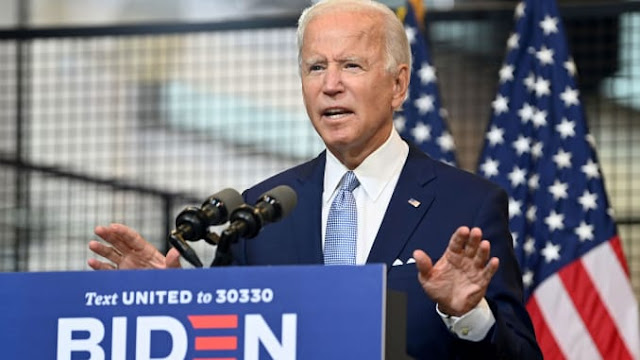 Joe Biden and the Democrats were suspiciously silent at their convention about violence and disorder in America’s cities, and Republicans hammered them for it. Biden finally came out belatedly with a prepared statement on Sunday:

The deadly violence we saw overnight in Portland is unacceptable. Shooting in the streets of a great American city is unacceptable. I condemn this violence unequivocally. I condemn violence of every kind by any one, whether on the left or the right. . . . As a country, we must condemn the incitement of hate and resentment that led to this deadly clash. It is not a peaceful protest when you go out spoiling for a fight.

In his speech yesterday Biden expanded a bit on that:

And now we have to stand against violence in every form it takes. Violence we’ve seen again and again and again, of unwarranted police shooting, excessive force, seven bullets in the back of Jacob Blake. Knee on the neck of George Floyd, killing of Breonna Taylor in her own apartment, violence of extremists and opportunists, right wing militias . . . And to derail any hope and support for progress, the senseless violence of looting and burning and destruction of property. I want to make it absolutely clear, so I’m going to be very clear about all of this, rioting is not protesting. Looting is not protesting. Setting fires is not protesting. None of this is protesting. It’s lawlessness, plain and simple. And those who do it should be prosecuted. Violence will not bring change, it will only bring destruction. It’s wrong in every way. It divides instead of unites, destroys businesses, only hurts the working families that serve the community. It makes things worse across the board, not better. It’s not what Dr. King or John Lewis taught and it must end.

Biden has received torrents of glowing praise for these statements, which really ought to be the bare minimum for an American leader — but then, his party, its media cheerleaders, and its street activists have not always done even that much. For example, Maxine Waters, now the chairwoman of the House Financial Services Committee, made her name defending riots in 1992 as a legitimate “insurrection,” and insists to this day that it is racist to use the term “riot.” Black Lives Matter protesters have even staged demonstrations in support of people arrested for looting, and given interviews defending looting. As David Harsanyi notes, Biden nowhere takes any responsibility for his staffers and even his running mate promoting donations to groups that bailed rioters out of jail.

But notice what’s missing from Biden’s statement. Biden never identified anyone as the people he was condemning, other than “right wing militias.” At most, he allowed, he was against riots, arson, looting, and assaults “whether on the left or the right” — in the abstract, without conceding that anybody on his side of the political spectrum, or anybody engaged in protests for left-wing causes, or anybody listening to voices on the left or voices in the Democratic coalition, was responsible for anything whatsoever. Never mind, say, the Portland shooter describing himself as “100 % ANTIFA all the way!” Or the progressive New York lawyers who threw Molotov cocktails at police. Or the Black Lives Matter protest organizer arrested for torching the Wendy’s in Atlanta where police shot Rayshard Brooks. Or the Black Lives Matter protester from Alaska who set fire to a police station in Seattle with officers inside. Or the Black Lives Matter protester arrested for throwing rocks at a truck with a Trump sign. Or the Black Lives Matter protester charged with attempted murder for shooting a man he called a “white supremacist” in Provo. Or the protest leader in San Luis Obispo who was arrested for leading a crowd to block traffic on a highway and smash in the rear window of a vehicle with a four-year-old inside — an arrest that has led to demonstrations demanding the charges be dropped. And so on.

Compare the reaction to this to the reaction to Donald Trump’s statements on the violence in Charlottesville. Trump’s various reactions included a lot of good, strong, specific statements about who he was condemning: “the KKK, neo-Nazis, white supremacists, and other hate groups that are repugnant to everything we hold dear as Americans. . . . The driver of the car is a murderer. . . . I’ve condemned neo-Nazis rough, bad people — neo-Nazis, white nationalists, whatever you want to call them.” As I’ve noted at length before, Trump’s response overall was not good; it was both politically and morally bad because he stepped on those lines, talking about “very fine people” that he imagined were there demonstrating peacefully. So, I’m not arguing here that Trump deserves praise for his Charlottesville statements, or that anybody else but him is responsible for them. But consider: How did Trump end up putting his foot in his mouth? He issued a vague statement at his country club on the Saturday of the rally that ended in a death (not weeks later, as Biden did here). He got a lot of criticism for being silent the previous night (the tiki-torch parade) and not saying anything specific enough in the Saturday remarks, so on Monday, he issued a prepared statement from the White House, which included some of the lines quoted above. The “very fine people” line only came out when the next day, Trump faced a battery of hostile press questions badgering him to be even more specific and asking him if he took any responsibility for the violence. Trump should have been able to handle that questioning without a damaging gaffe, but then, he’s Trump.

If we expect him to be president, to be held to that same standard, why isn’t Biden getting the same treatment? He took no questions yesterday. Why aren’t reporters and commentators up in arms to ask Biden more pressing questions about who exactly he is condemning, and for that matter, who he thinks is behind riots, arson, looting, shootings, and assaults? Aaron Blake of the Washington Post is at least honest enough to put his finger close to the problem:

Biden did condemn the violence in the days after Floyd’s killing set off demonstrations and unrest. He also explicitly said that “anarchists” should be prosecuted, contrary to Trump’s claim. The Trump argument seems to be that Biden isn’t condemning the violence in the terms he would prefer — specifically that it should be more focused on left-wing extremists, anarchists and antifa. Democrats, though, are reluctant to zero in on those groups, because they worry that it legitimizes the often-hyperbolic claims about just how prevalent they are in the scenes across the country. Republicans have also wrongly claimed Biden called perpetrators of violence “peaceful protesters,” when in fact Biden has simply referred to peaceful protests and said that most demonstrators are, in fact, peaceful.

The reason why Bill Clinton’s famous “Sister Souljah moment” was effective politics was that he called out someone by name and didn’t bury it in vague platitudes about how both sides do bad things. Biden, by contrast, is giving cover to those on his side who are still minimizing the violence or pretending that it is a false-flag campaign of right-wing conspirators (or, as Adam Schiff would have you believe, Russians). If Biden’s gambit works, it will be because the media won’t try to pin him down on it because they’re afraid of what the notoriously gaffe-prone Biden will say, or because they don’t want to force him on things he doesn’t want to say. Indeed, when it comes to pinning blame for the violence, a lot of progressive and liberal pundits are trying to give Biden credit not only for things he hasn’t said, but for things they won’t say, either.

Trump, ultimately, failed the Charlottesville test. As much as any one thing, Biden has built his whole campaign around that. But now, Biden should be asked to pass the same test, and not given a mulligan for vague blather about “any one, whether on the left or the right.”
Opinion