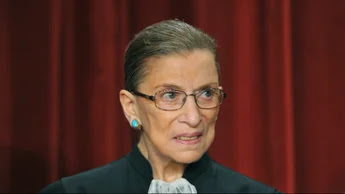 Justice Ruth Bader Ginsburg, the liberal leader of the Supreme Court and a trailblazing champion of women’s rights, died on Friday. She was 87 years old.
Seen as a moderate when President Bill Clinton nominated her to the bench in 1993, Ginsburg went on to leave a lasting mark in the realm of gender equality, civil liberties and pay equity, and grew to achieve improbable late-in-life recognition as a pop culture icon and hero of the progressive movement.
Her first major opinion as a justice came in 1996 when she wrote the majority decision in United States v. Virginia. The ruling struck down the Virginia Military Institute’s 157-year-old policy of male-only admissions as unconstitutional, and set a stricter legal standard for government action that treats men and women differently.
"Women seeking and fit for a VMI-quality education cannot be offered anything less under the state's obligation to afford them genuinely equal protection," Ginsburg wrote in the 7-1 decision.
Ginsburg also gained renown for her cogent and sharply worded dissents.
According to Linda Greenhouse, a longtime Supreme Court reporter and analyst for the New York Times, it was through Ginsburg’s dissenting opinions during the mid-2000s that she “found her voice, and used it.”
One such dissent came in 2007 after the court ruled 5-4 on procedural grounds to bar a pay discrimination claim brought by former Goodyear Tire employee Lilly Ledbetter.
Ginsburg took the relatively rare step of reading her dissent from the bench to signal the intensity of her disagreement, with the 5-foot-one-inch tall justice donning a gold-embroidered black jabot for the occasion. It would not be the final word on the case, however.
In 2009, President Barack Obama signed his first official legislation with the Lilly Ledbetter Fair Pay Act, which effectively overturned the Supreme Court’s decision by making it easier to file pay discrimination suits. Ginsburg kept a framed copy of the bill, signed by Obama, in her chambers.
Though Ginsburg became the high court’s leading liberal, she was best friends with its leading conservative. The late Justice Antonin Scalia and Ginsburg were an unusual pair — he a gregarious conservative, she a soft-spoken, self-described “flaming feminist litigator” — but they bonded over their love of the opera.
Scalia considered Ginsburg the Thurgood Marshall of women’s rights, a reference to the legendary civil rights lawyer who helped end racial segregation before becoming the nation’s first African American Supreme Court justice.
Similarly, Ginsburg spent the early part of her career as a legal pioneer in her own right, embarking on a ground-shifting legal crusade in the 1970s for gender equality under the law as an attorney at the American Civil Liberties Union that included successfully arguing several cases before the Supreme Court.
At the tail-end of her career, the octogenarian Ginsburg became a pop culture sensation. She captivated millennials, who affectionately dubbed her the “Notorious R.B.G,” a nickname inspired loosely by the late rapper Notorious B.I.G.
Ginsburg was the subject of a documentary, a feature film starring actor Felicity Jones, memes, merchandise and several books, including one on her exercise routine at age 85: pushups, planks and squats.
At speaking engagements, Ginsburg was often asked how she balanced her judicial career with her family. That was when she spoke fondly about her husband.
“He’s the only boy I’ve ever known who cared I had a brain,” she said while speaking at Georgetown Law in 2018.
Her husband, the late Marty Ginsburg, died from cancer in 2010.
While Ginsburg long credited her husband’s Washington influence for helping her get nominated to the Supreme Court, President Clinton said it was Ruth's interview that secured her seat on the bench.
“Literally within 15 minutes I decided I was going to name her,” Clinton told CNN.
Survivors include Ginsburg's two children, Jane Ginsburg and James Ginsburg, and her grandchildren, who affectionately called her “Bubbe.”
National