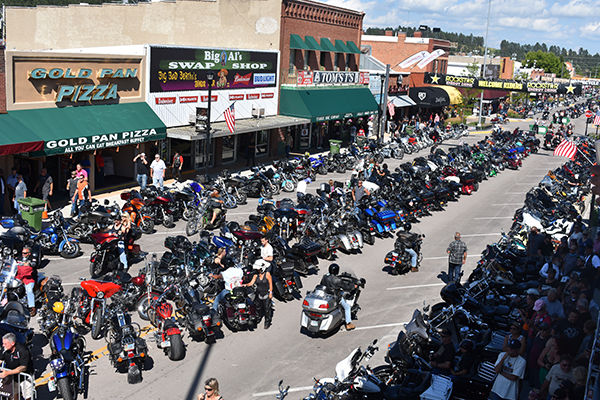 South Dakota Gov. Kristi Noem (R) vocalized her support Tuesday for attendees of the Sturgis Motorcycle Rally last month, calling a new report on the estimated number of COVID-19 cases following the event “fiction.”
The governor tweeted a response to a study from the IZA Institute of Labor Economics, which estimated that more than 250,000 reported COVID-19 cases between Aug. 2 and Sep. 2 could be tied back to the Sturgis Rally. The study added that the rally caused a total of approximately $12 billion in public health costs.
“This report isn't science. It's fiction,” Noem said in her tweet. “Under the guise of academic research, it's nothing short of an attack on those who exercised their personal freedom to attend Sturgis.”
“Predictably, some in the media breathlessly report on this non-peer reviewed model, built on incredibly faulty assumptions that do not reflect the actual facts and data,” the governor added in a follow-up tweet. “At one point, academic modeling also told us that South Dakota would have 10,000 COVID patients in the hospital at our peak. Today, we have less than 70.”
The report is based on analysis from anonymized cellphone data from the 10-day event that showed “smartphone pings from non-residents” and “foot traffic at restaurants and bars, retail establishments, entertainment venues, hotels and campgrounds each rose substantially.”
The Associated Press reported at the time of the rally that most who attended did not adhere to CDC-advised coronavirus precautions, including social distancing and wearing masks.
According to a database kept by The New York Times, South Dakota had 103 new reported COVID-19 cases on Sept. 8. Over the past week, the state has had an average of 236 cases per day, which is up 48 percent from two weeks ago.
Overall, the state has had 15,403 cases and 173 deaths from the novel coronavirus.
National