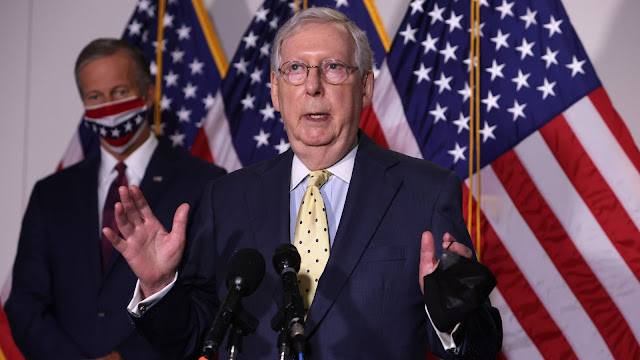 Senate Democrats blocked a GOP coronavirus bill on Thursday amid a deep stalemate over the next relief package.
Senators voted 52-47 on the roughly $500 billion Republican bill, which marked the first coronavirus-related legislation the chamber has voted on since it passed a $484 billion package in April.
The vote handed a symbolic victory to Senate Majority Leader Mitch McConnell (R-Ky.), who spent weeks haggling with Republicans and the White House over the contours of the pared-down GOP bill as he sought to overcome deep divisions over the path forward.
GOP leadership worked behind the scenes to lock down 51 votes, a U-turn from last month when McConnell predicted that up to 20 GOP senators wouldn’t vote for any additional legislation. GOP Sen. Rand Paul (Ky.) was the only Republican to vote against the bill on Thursday.
But it failed to get the 60 votes needed to overcome Thursday’s procedural hurdle as congressional Democratic leadership and the White House remain at a standoff over a fifth coronavirus package.
The brinkmanship was on full display ahead of Thursday’s vote, with McConnell and Senate Minority Leader Charles Schumer (D-N.Y.) trading barbs on the Senate floor.
McConnell called Schumer’s strategy on the coronavirus bill “toxic,” after the Democratic leader told reporters that Republicans were the “enemy of the good.”
“Senators who share the Democratic leader’s toxic attitude, who think the real enemy are their political opponents, I assume will follow his lead and vote no. They can tell American families they care more about politics than helping them,” McConnell added.
Schumer fired back that Thursday’s vote was “pointless” and that the GOP bill was “emaciated.”
“It is laden with poison pills. Provisions our colleagues know Democrats would never support to guarantee the bill’s failure. The truth of the matter is the Republicans and the Republican leader don’t want to pass a bill too many on the hard right in the Senate and outside it would be angry” with, Schumer said.
The Republican bill provides $300 per week in federal unemployment benefits through Dec. 27, another round of Paycheck Protection Program (PPP) funding, more money for testing and schools and liability protections from coronavirus-related lawsuits.
The GOP bill comes after near daily conversations between Senate Republicans, Treasury Secretary Steven Mnuchin and White House chief of staff Mark Meadows about how to craft a bill that could assuage conservatives and fiscal hawks.
The bill included a tax credit backed by Sen. Ted Cruz (R-Texas) as well as language allowing for hundreds of billions from the March bill to be recouped.
Republicans had previously planned to vote in early August on stand-alone PPP or unemployment bills but had to scrap those plans amid GOP infighting.
Republicans acknowledged that the Thursday vote would fall short. But GOP leadership faced pressure to come up with a plan to vote upon weeks before the election to give their vulnerable incumbents in key battleground states something to tout back home.
And Republicans argued that it was important to be able to show voters what coronavirus relief they support, and force Democrats to go on the record blocking it. Though most Senate Democrats immediately came out in opposition to the GOP plan, Sen. Doug Jones (D-Ala.), the most vulnerable senator on the ballot in November, remained undecided for days.
“I think that having the vote is important. And I think demonstrating that there are not unanimous but nearly unanimous support among Republicans for this set of solutions, hopefully it will inspire Democrats to come back to the table and work with us on a solution,” Sen. John Thune (S.D.), the No. 2 Senate Republican, told reporters.
But there’s no sign that congressional Democrats or the White House is willing to break the stalemate.
Mnuchin, Meadows, Schumer and House Speaker Nancy Pelosi (D-Calif.) remain far apart not only on the price tag but also on significant policy issues including unemployment insurance and more money for state and local governments.
Republicans unveiled a $1.1 trillion bill in late July, and Mnuchin has suggested the White House could go as high as $1.5 trillion. But he’s also suggested this week that his focus is shifting to an end-of-the-month deadline to fund the government. There are no talks currently scheduled between the foursome.
Pelosi, during a press conference with reporters on Thursday, dug in on the Democratic negotiating position. Democrats have offered to come down to $2.2 trillion after the House previously passed a $3.4 trillion bill.
“Let’s not have a skinny bill when we have a massive problem,” she said.
Senators appear increasingly pessimistic that Congress will be able to get a deal until after the November election.
“I think there’s always some possibility, but … unless something really broke through, it’s not going to happen,” said Sen. Richard Shelby (R-Ala.).
Democrats are hoping that by blocking the GOP bill on Thursday, it will force the White House back to the negotiating table. Democrats similarly blocked a Republican bill in March but Congress was able to come together on the $2.2 trillion CARES Act.
“Each time McConnell said, it's our bill or nothing, when it was a bill without any input from Democrats, when the bill was defeated they came back,” Schumer said, “and we actually got some bipartisan stuff done. I would hope they would do that.”
National