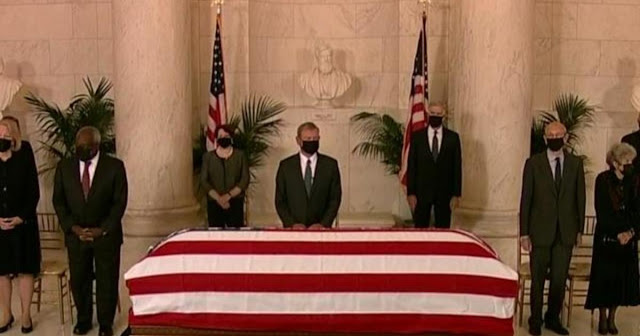 The late Supreme Court Justice Ruth Bader Ginsburg laid in repose at the nation’s highest court on Wednesday, commencing a three-day series of events in Washington to give people the chance to pay their respects to the liberal icon.
Ginsburg, who died on Friday at the age of 87, was the second woman to serve on the Supreme Court, where she held her seat for 27 years.
Ginsburg will lie in repose at the Supreme Court on Wednesday and Thursday. She’ll then become the first woman to lie in state in the Capitol on Friday and only the second Supreme Court justice to receive the rare honor.
Former law clerks to Ginsburg served as honorary pallbearers when her casket arrived at the Supreme Court on Wednesday.
Ginsburg’s family, friends and fellow members of the Supreme Court held a memorial service inside the court before commencing the public viewing.
"It has been said that Ruth wanted to be an opera virtuoso, but became a rock star instead," Chief Supreme Court Justice John Roberts said. "But she chose the law. Subjected to discrimination in law school and the job market because she was a woman, Ruth would grow to become a leading advocate fighting such discrimination in court. She was not an opera star, but she found her stage right behind me, in our courtroom. There, she won famous victories that helped move our nation closer to equal justice under law, to the extent that women are now a majority in the law schools, not simply a handful."
“Her voice in court and in our conference room was soft. But when she spoke, people listened,” Roberts said.
After the ceremony, Ginsburg’s casket was moved outdoors in front of the Supreme Court so that members of the public could pay their respects from a distance in accordance with coronavirus pandemic guidelines.
A steady stream of mourners lined up to see Ginsburg’s casket, which was draped in the American flag and surrounded by bouquets of white flowers.
The line for members of the public snaked all the way to the back of the Supreme Court and zig-zagged to make enough space. Several vendors set up tables on the sidewalk near the start of the line to sell Ginsburg-themed T-shirts, buttons and even masks.
Former President Clinton, who nominated Ginsburg in 1993, and former first lady and Secretary of State Hillary Clinton stopped by to pay their respects on Wednesday.
Numerous members of Congress also trekked across the street from the Capitol to view Ginsburg's casket, including Senate Minority Leader Charles Schumer (D-N.Y.) and Sen. Bernie Sanders (I-Vt.), who both attended the same Brooklyn high school as the late justice.
President Trump is expected to pay his respects on Thursday.
Ginsburg’s death just over a month before the November elections has sparked a partisan brawl over filling the sudden Supreme Court vacancy.
Senate Republicans are aiming to fill the vacancy as soon as possible before Election Day, despite refusing to consider then-President Obama’s Supreme Court nominee in 2016 when the late Justice Antonin Scalia died.
Senate Majority Leader Mitch McConnell (R-Ky.) and other Republicans have argued that the situation is different this time than in 2016 because both the Senate and the White House are controlled by the same party.
Trump plans to announce his nominee, which he has said will be a woman, on Saturday.
Speaker Nancy Pelosi (D-Calif.) announced earlier this week that Ginsburg would lie in state in the Capitol’s Statuary Hall, making her the first woman in history to receive the honor.
Civil rights icon Rosa Parks previously laid in honor in the Capitol rotunda in 2005. But as a public official, Ginsburg will be the first woman to lie in state.
The only other Supreme Court justice to have laid in state in the Capitol was William Howard Taft, who also served as president, in 1930.
Ginsburg’s casket will be placed over the next few days of ceremonies on top of the Lincoln catafalque, which was constructed to support the casket of President Lincoln in 1865 and has traditionally been used since then for people who have lain in state in the Capitol.
After this week’s ceremonies, a private interment service for Ginsburg will be held at Arlington National Cemetery, the court said.
National