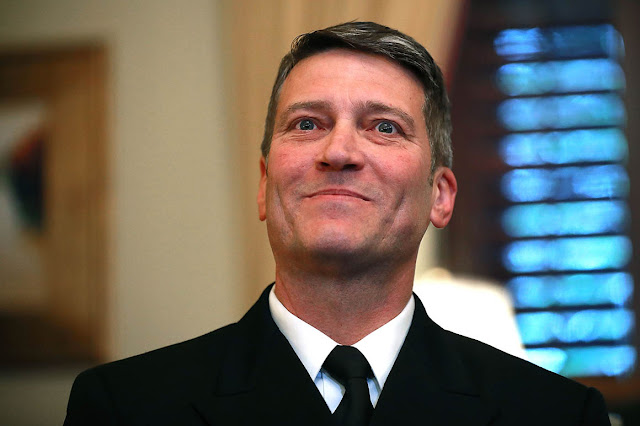 A former White House physician underscored President Trump's claim that Democratic presidential nominee Joe Biden might take performance enhancing drugs before debating him on Tuesday night.
"Obviously something is going on with this man at this point," Dr. Ronny Jackson said on Fox News' "Hannity." "I think it's completely reasonable to ask if he's being medicated because there have been a couple of times where he has come out and looked a little more energetic than he has in the last few months."
Jackson, a Trump loyalist and candidate in the 13th District congressional race in Texas, said it is possible Biden is having "good days and bad days" as part of what he called the former vice president's "cognitive decline."
"But I think it’s completely reasonable to ask if he’s taking medications to help him with his alertness and his memory," Jackson said.
Over the weekend, Trump tweeted he would demand Biden take a drug test before taking the debate stage this week in Cleveland.
"I will be strongly demanding a Drug Test of Sleepy Joe Biden prior to, or after, the Debate on Tuesday night," Trump said. "Naturally, I will agree to take one also. His Debate performances have been record setting UNEVEN, to put it mildly. Only drugs could have caused this discrepancy???"
The Biden campaign dismissed the notion that he would ever submit to a drug test.
“Vice President Biden intends to deliver his debate answers in words. If the president thinks his best case is made in urine he can have at it," Biden's deputy campaign manager Kate Bedingfield said according to Fox News. "We’d expect nothing less from Donald Trump, who pissed away the chance to protect the lives of 200K Americans when he didn't make a plan to stop COVID-19.”
Trump leveled a similar line of attack against Hillary Clinton in 2016, suggesting she too was on drugs during three debates that year.
National Texas