Proving to be not all that uniting 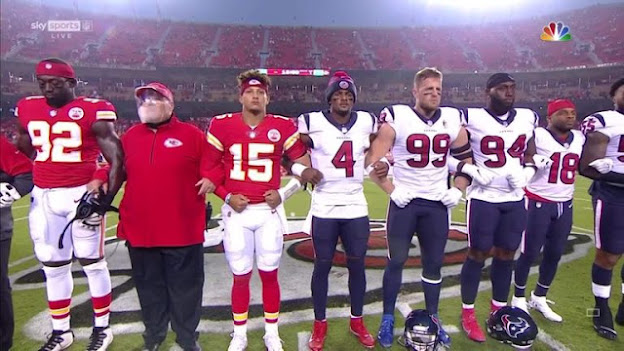 Last night, in the National Football League season opener, the Houston Texans chose to remain in the locker room for the National Anthem, as well as a performance of “Lift Every Voice and Sing,” which is sometimes referred to as the Black National Anthem. NBC sideline reporter Michelle Tafoya said Texans executive Jack Easterby told her the players decided as a team to stay in the locker room so “there would be no misinterpretation of celebrating one song or throwing shade on the other.”
The Texans then took the field to join the Kansas City Chiefs for a pregame moment of silence “dedicated to the ongoing fight for equality in our country.” During the moment of silence, some fans in Kansas City booed. (The stadium was at about one-quarter capacity due to coronavirus restrictions.)
There was a time, not that long ago, when the National Anthem itself would have been considered a moment of unity. And the NFL clearly wanted that moment of silence to feature the least-controversial, least-divisive interpretation of “the ongoing fight for equality in our country” as possible; the scoreboard flashed, “We support equality; we must end racism; we believe in justice for all; we must end police brutality; we choose unconditional love; we believe Black lives matter; it takes all of us.”
Were the fans who booed opposed to that particular message? Or were they booing the Texans’ decision to stay in the locker room? Or did those fans believe that NFL players shouldn’t touch any ongoing political or social issue? Or were they just tired of ceremonies and wanted the game to start? Or did they just have an axe to grind against players and coaches, many of whom are black, locking arms in a ceremony declaring “Black lives matter”? Now some local columnists worry that the booing tarnished the image of Kansas City.
We are altering previously existing moments of unity and replacing them with new moments of unity, which are, so far, proving to be not all that uniting.
Opinion