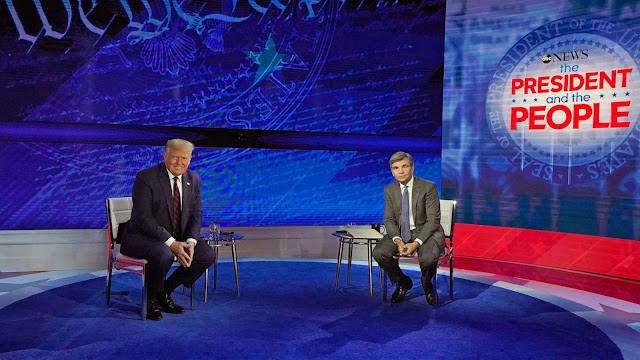 President Trump attended an ABC News town hall with undecided voters moderated by George Stephanopoulos last night. The evening was a mixed bag for the president, and consisted of the usual Trump fare: rambling interspersed with the occasional repugnant, charming, and informative utterance. Here are a few highlights and lowlights from the event.
Positive: Trump’s best exchange of the evening came with a Latina immigrant who just recently became an American citizen. While Stephanopoulos was introducing her as such, Trump could be heard in the background saying “very good.” When it was time for her to ask her question, she tearfully struggled to find the words and the president was very gracious and empathetic. Upon collecting herself, she explained that her mother had died last month and how it had always been her dream to become a citizen (which she did) before asking Trump how he would change the immigration system to help people such as her and her mother become citizens. Trump’s answer was unsatisfactory from a policy perspective — he gave his usual spiel about wanting people like her in the country, but wanting them to come legally — but he came across as warm and concerned, telling her that her mother had raised “a great daughter.”
Negative: In almost every question about the coronavirus, Trump scored an own goal. Asked about a national mask mandate, he easily could have explained that he lacks the authority to implement one. Instead, he gave a winding answer about how a lot of people don’t think masks are good. Asked about why he would downplay the virus, Trump claimed to have “up-played” it and boasted about placing travel restrictions on people coming from China. A prolonged back-and-forth with Stephanopoulos led to Trump singing the praises of “herd mentality.” Just tell people to wear masks when appropriate, Mr. President.
Positive: Trump received several questions about the protests and riots that have followed the death of George Floyd earlier this year. He gave an effective answer to the least combative one about balancing law and order with the need for reform. Of Senator Tim Scott’s (R., S.C.) JUSTICE Act, the reform bill blocked by Senate Democrats in June, Trump declared “It didn’t get done. It should have gotten done” before going on to express his solidarity with law enforcement. Stephanopoulos pressed him when he talked about law and order, asking him why he hadn’t restored it in cities like Portland. Correctly, Trump pointed out that he could not mobilize the National Guard without invoking the Insurrection Act, which would be considered anathema on the left as evidenced by the Tom Cotton op-ed fiasco at the New York Times.
Negative: Once again, the president exhibited his lack of decorum by lashing out at the late senator John McCain, a decorated war hero tortured by the North Vietnamese. Fielding a question about the explosive Jeffrey Goldberg story in the The Atlantic, Trump strongly denied the charges made in the story before attacking McCain:
As far as John McCain, I was never a fan of John McCain. I never thought he treated our vets well, he didn’t do the job. I was never a fan of his. But — and I think that’s fine and everybody knows that, and I said it to his face. I was very much up in that.
Accusing McCain of not treating “our vets well” was gross. Any other person would apologize for his past comments, but instead Trump chose to double down on them. It was hard to watch, and it undermined his denials.
The president was his typical self on Tuesday night, appearing at times charming, clueless, and vile. It seems doubtful that his performance will convince many persuadables, but Trump does deserve some credit for showing up to an event such as this while his opponent keeps to a shockingly light campaign schedule.
Opinion