Pelosi claims she was 'set up' by San Francisco salon 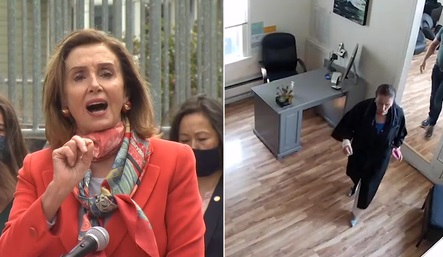 Speaker Nancy Pelosi (D-Calif.) said on Wednesday that she was "set up" by a San Francisco hair salon that said it could accommodate her for an indoor appointment Monday despite citywide restrictions on salon services.
Pelosi said that she was told by eSalon that it was allowed to have one customer at a time inside its establishment. But salons in San Francisco have been closed since the coronavirus pandemic began and only allowed to begin providing services outdoors on Tuesday under the city's guidelines.
"I take responsibility for trusting the word of a neighborhood salon that I've been to over the years many times, and that when they said that we're able to accommodate people one person at a time and that we could set up that time, I trusted that. As it turns out, it was a set up. So I take responsibility for falling for the set up," Pelosi said at a press conference in San Francisco.
A reporter at the press conference said that they had spoken to a San Francisco barber who is a fan of Pelosi but believed she owed service industry workers an apology.
"Well, I don't. I think that this salon owes me an apology for setting up," Pelosi responded.
"I have been inundated by people who are in the hair service industry, saying, thank you for calling attention to this. We need to get back to work," Pelosi added. "Many of them annoyed at the set up."
Fox News obtained video footage on Tuesday showing Pelosi inside the establishment without a mask.
The owner of eSalon, Erica Kious, told Fox News that she has independent stylists working for her who rent chairs in her salon and claimed that she "can't control" what they do if they rent the chairs from her.
“I was like, are you kidding me right now? Do I let this happen? What do I do?” Kious said of her reaction when a stylist told her on Sunday night that Pelosi planned to come for a hair appointment.
“It was a slap in the face that she went in, you know, that she feels that she can just go and get her stuff done while no one else can go in, and I can’t work,” Kious said.
But an attorney representing the stylist who did Pelosi's hair, Jonathan DeNardo, said in a statement late Wednesday that Kious had authorized Pelosi's appointment the night before she arrived.
"Mr. DeNardo advised Ms. Kious that he would not proceed with Speaker Pelosi’s appointment without Ms. Kious’ authorization. Ms. Kious  took special interest in the appointment during this telephone call, wherein she made several vitriolic and incendiary comments about Speaker Pelosi and her purported responsibility for temporarily suspending operations of Ms. Kious’ business, despite such orders actually being put into place not by Speaker Pelosi, but by Governor Gavin Newsom and San Francisco Mayor London Breed. Ultimately, Ms. Kious authorized Mr. DeNardo to proceed with Speaker Pelosi’s appointment," the statement read.
Earlier Wednesday, Pelosi expressed irritation with the reporters asking follow-up questions about the salon appointment at the press conference, which was meant to be focused on the pandemic's impact on education and press the Senate to take up House Democrats' coronavirus relief package that passed in May.
"Do you have any questions about the fact that people are dying? That schools need to open and the rest?" Pelosi said.
Pelosi also maintained that she "always" wears a mask and only briefly removed it while a stylist was washing her hair at the appointment on Monday.
"I just had my hair washed. I don't wear a mask when I'm washing my hair," Pelosi said.
San Francisco's guidelines state that "any service that requires your customer to remove their face covering are not permitted at this time."
National