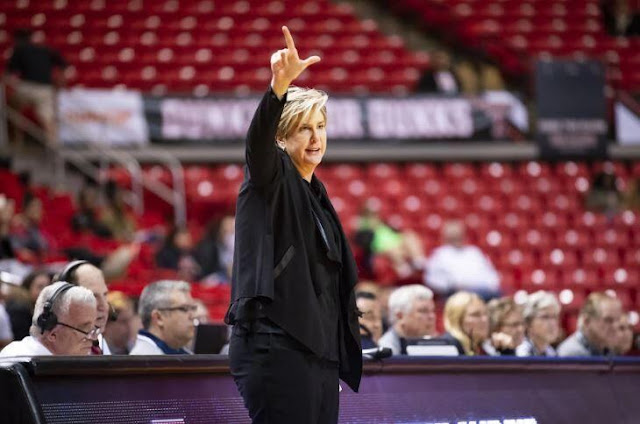 Former Texas Tech Lady Raiders head coach Marlene Stollings is preparing to sue Texas Tech claiming she was fired without cause in August, according to ESPN.

Stollings believes she was fired without cause and retained attorney Peter Ginsberg, per the report. She told ESPN she wants to clear her name to get anther coaching job.

“It is my goal to coach again,” Stollings said, via ESPN. “I knew I wanted to coach since I was in middle school. I've worked diligently to do it the right way.”

Stollings had four years left on her contract, but will not get the remaining money unless it is found she was fired without cause.

This week, Ginsberg sent a letter to Texas Tech vice chancellor and general counsel Eric Bentley regarding the preservation of all documents and electronically stored information regarding Stollings' firing.

The move came months after Hocutt said the university investigated allegations, which include claims former strength and conditioning coach Ralph Patrella sexually harassed players. According to the article, Tech formed a committee to review allegations of abuse against Patrella as well as other claims made against the program. The four-person committee included deputy athletics director Tony Hernandez and Title IX investigator Glenn Mellinger, according to a statement Hocutt gave to USA Today before the article was published:

"Earlier this year, we were made aware of allegations of inappropriate behavior by a support staff member of our women’s basketball program. When the individual was confronted with the allegations, the individual resigned from their position before any university review could take place," Hocutt said.

"Additionally, based on information received we conducted an in-depth program review of our women’s basketball program. ... I have thoroughly discussed this review with coach Stollings and am confident that we are taking appropriate steps to improve the relationship and communication between coaches and student-athletes so that we can continue to grow the success of our program both on and off the court."

Hocutt said some players brought concerns to Judy Henry, the Senior Women's Administrator at Texas Tech, after year one of Marlene Stollings' tenure.

"By all indications things had improved for the time being," Hocutt said.

Entering year two, Hocutt said there were indications 'things weren't where they hoped they'd be'. He said he started going to the locker room after home games and dropped by practice when he could.

"I determined that it was going to be necessary, at the end of the season, to have an in-depth review of the program," Hocutt said.

Stollings left Minnesota for Texas Tech after the 2017-18 season. In her four seasons with the Gophers, Stollings' teams were 82-47 and made two appearances in the NCAA tournament.

The USA Today report stated: "In a series of season-ending exit interviews, players alleged a culture of abuse in the Texas Tech program since Stollings took over in April 2018. They say a toxic atmosphere has prompted an exodus of players, including 12 of 21 leaving the program, seven of whom were recruited under Stollings. Two players detailed these allegations to the NCAA and were granted waivers allowing them to play the next season."

Allegations against Stollings are her staff includes sexual harassment by a strength and conditioning coach, foreign players saying they were ridiculed, and a player who said she was "admonished by coaches for displaying symptoms of depression."

One former Texas Tech player, Mia Castenada, who transferred to Washburn University in Kansas, told USA Today: “They were breaking not just athletes, they were breaking people. And they didn’t realize that.”

A committee at the school was formed to review the allegation and athletics director Kirby Hocutt told USA Today: "I have thoroughly discussed this review with coach Stollings and am confident that we are taking appropriate steps to improve the relationship and communication between coaches and student-athletes so that we can continue to grow the success of our program both on and off the court."

Stollings said in a statement published in the article: "We know change is difficult and that has been no different at Texas Tech. Some wonderful young women have decided to leave our program and pursue their dreams elsewhere. I hope they have found everything they are looking for at their new destination. Our administration and my staff believe in the way we are building and turning this program around here. Our student athletes are developing a disciplined approach both on and off the court."

Entering the COVID-19 shutdown, Hocutt said the review was supposed to happen in April. It was delayed through June. Hocutt finally met with Marlene in early July. The team meeting was the next step and was originally scheduled for July 22, but was pushed back since Hocutt had a scheduled donor trip. It was rescheduled for July 29, but Stollings requested pushing it back another week since a player was injured. Hocutt said the meeting took place Wednesday, August 5, the day USA Today published its front-page article. The next day, Marlene Stollings was fired.

"If it would have been on a day different than when the article came out would the conversation had been as open and as free flowing as it was as a team? I don't know that," Hocutt said.

Hocutt said Tech wasn't aware of the magnitude of the situation or the affect it had on the women in the locker room. To ensure a new culture, he says there will be an abundance of change.

"As we get ready to bring a new coaching staff in we will probably assign a new administrative liaison to women's basketball just to hit that complete reset button," Hocutt said.