Lawsuit seeks reparations from city of Tulsa over 1921 massacre 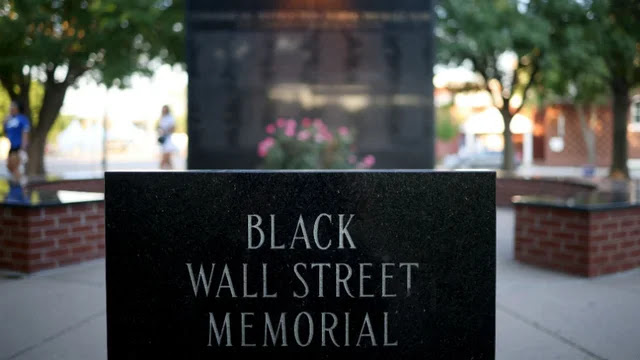 A lawsuit filed this week in Tulsa, Okla., is seeking reparations from the city and other government localities over one of the worst race massacres in U.S. history nearly a century ago.
Plaintiffs in the case include 105-year-old Lessie Benningfield Randle, a survivor of the 1921 massacre, along with relatives of several other victims, according to documents filed in Tulsa County District Court.
The complaint states that Randle suffers from "emotional and physical distress that continues to this day" from the attacks led by white mobs that killed as many as 300 African Americans in the city.
Mobs moved through Tulsa's Greenwood district, torching and looting buildings and wreaking damage on homes in an area commonly referred to as Black Wall Street.
Greenwood was once a thriving business center in Tulsa, comprising around 40 blocks of restaurants, hotels and theaters owned and operated by Black business owners.
The court filing does not include specific damage amounts sought by plaintiffs, though it estimates that property damages for residents amount to between $50 million and $100 million in today's currency.
Plaintiffs argue that the 1921 massacre was a public nuisance based on the state's statutes, affecting an entire community or borough simultaneously while "damage inflicted upon individuals may be unequal."
They are seeking a court declaration that the "public nuisance created by Defendants is capable of being abated through the expenditure of money and labor."
Damario Solomon-Simmons, an attorney for the plaintiffs, wrote in a Los Angeles Times op-ed earlier this year that the idea of "reparations" for past racial injustices "is finally losing its taboo."
"The urgency of the protests across America shows that reforms won't last unless we pay for the crimes of the past," the attorney added.
Attorneys backing the lawsuit maintain that the effects of the massacre are still impacting parts of the community today.
They noted unemployment among Black Tulsans is more than double that of white people, adding that the median household income for Black residents, on average, is $20,000 less than white residents.
Reparations over the massacre were also sought in 2005, but the U.S. Supreme Court rejected an appeal to hear the case, The Oklahoman reported.
Attorneys are now pushing to use the same Oklahoma statute that factored into a 2019 decision against Johnson & Johnson over the company's role in the state's opioid crisis.
National