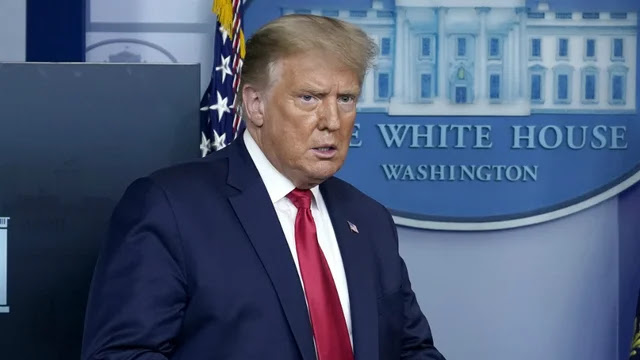 President Trump on Friday announced the normalization of diplomatic relations between Bahrain and Israel, the second such breakthrough in recent weeks as the administration works to broker cooperation between Arab nations and Israel.
"This is a historic breakthrough to further peace in the Middle East. Opening direct dialogue and ties between these two dynamic societies and advanced economies will continue the positive transformation of the Middle East and increase stability, security and prosperity in the region," Trump said in a joint statement with Israeli Prime Minister Benjamin Netanyahu and King Hamad bin Isa Salman al-Khalifa of Bahrain.
The president, speaking to reporters in the Oval Office, suggested that the development carried additional significance because it was announced on the 19th anniversary of the Sept. 11, 2001, terrorist attacks.
“There’s no more powerful response to the hatred that spawned 9/11 than the agreement that we're about to tell you,” Trump said.
The news comes roughly a month after Trump announced the normalization of ties between Israel and the United Arab Emirates. Trump has pointed to both announcements as major foreign policy achievements, which he is likely to tout in the closing stretch of the 2020 presidential campaign.
Administration officials had expressed optimism that additional Arab nations would follow suit after the UAE normalized relations with Israel in mid-August.
"I am very hopeful that there will be more to follow," Trump said. "I can tell you there's tremendous enthusiasm on behalf of other countries to also join."
Bahrain, a small island kingdom near Saudi Arabia, has been a reliable partner for the U.S. It hosted a Peace to Prosperity event in 2019 as part of a push for Middle East peace between the Israelis and the Palestinians, and it is home to a U.S. Naval fleet.
Bahrain officials are expected to join representatives from Israel and the UAE at the White House next week for a formal signing ceremony.
The normalization of relations would likely not have been possible without approval from Saudi Arabia. The kingdom does not have formal diplomatic relations with Israel, but has been a key behind-the-scenes player in U.S. efforts to broker peace in the region.
Asked whether the UAE and Bahrain deals could be a prelude to an agreement between Saudi Arabia and Israel, White House senior adviser Jared Kushner said he felt it was an “inevitability” that all Middle Eastern nations would eventually normalize relations with Israel.
“I think it’s definitely worth noticing the trend in the region and what I’ll just say is… the leadership in the region is — they recognize that the approach that’s been taken in the past hasn’t worked,” Kushner, who has led the administration's Middle East peace efforts, told reporters. “And they realize that their people want to see a more vibrant and exciting future. So we’ve been trying to bring the region together.”
While political strategists note that presidential elections are typically more dependent on domestic issues, Trump has in recent weeks racked up diplomatic victories in the run-up to Election Day. He announced the normalization of relations between the UAE and Israel in mid-August after the two nations had been quietly moving toward diplomacy for years.
Last week, Trump announced an economic pact between Serbia and Kosovo. As part of the arrangement between the Balkan states, Serbia agreed to move its embassy to Jerusalem and Kosovo formally recognized Israel.
Trump administration officials have emphasized the president's role in the Balkan deal, though the agreement does not include “mutual recognition” between Serbia and Kosovo, Serbian President Aleksandar Vucic said.
Still, the announcement reflects how Trump has focused his foreign policy on close ties with Israel, and the recent diplomatic announcements provide him with a series of accomplishments to tout in the final weeks of the presidential race.
Trump regularly recounts at rallies his decision to relocate the U.S. Embassy in Israel from Tel Aviv to Jerusalem and to formally recognize the latter as the capital of Israel.
The agreements are also a boon to Netanyahu, who faces corruption scandals and criticism of his handling of the COVID-19 outbreak.
World