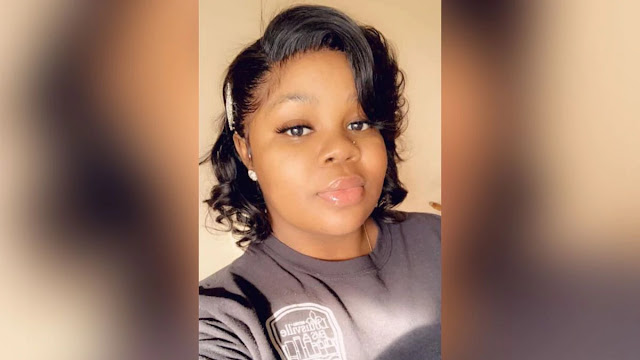 A Kentucky grand jury on Wednesday did not bring any charges against police officers in the killing of Breonna Taylor, and instead announced three lesser counts of wanton endangerment against Louisville police officer Brett Hankison.
Notably, and to the outrage of many who have waited over six months in hopes of justice for Taylor, the three counts of wanton endangerment are not directly tied to the fatal shooting of Taylor.
Kentucky Attorney General Daniel Cameron (R), a rising political star in his party, told reporters that there was not conclusive evidence that any of the 10 shots Hankison fired in Taylor’s apartment on March 13 actually hit Taylor.
Some of the bullets, however, did travel into an adjacent apartment where three people unrelated to the case were residing, which is why Hankison now faces charges.
Civil rights attorney Ben Crump called the grand jury’s decision “outrageous and offensive.”
“If Brett Hankison's behavior was wanton endangerment to people in neighboring apartments, then it should have been wanton endangerment in Breonna Taylor's apartment too,” Crump, who is representing the Taylor family, tweeted. “In fact, it should have been ruled wanton murder!”
Classified as a Class D felony in the state, each count of wanton endangerment can carry up to five years of prison time.
The two other officers — Jonathan Mattingly and Myles Cosgrove — fired six and 16 shots, respectively. Cameron said that Taylor was shot six times, though only one of the bullet wounds proved to be fatal.
The killing shot was fired from Cosgrove, Cameron explained, but he said that both Cosgrove and Mattingly were “justified” in their use of deadly force under Kentucky law since Kenneth Walker, Taylor’s boyfriend, fired first.
Walker has admitted to shooting first but claimed that he thought the plainclothes officers were intruders and never announced themselves.
Even though they were at Taylor’s apartment with a no-knock warrant, Cameron said that the police trio banged loudly on the door and announced their presence. The head prosecutor said that this was corroborated by a single civilian witness.
A reporter pressed Cameron on this during his press conference, citing that the witness in question was the only person out of a dozen witnesses who said that they heard the police knock and identify themselves.
“[The grand jury] got to hear and listen to all the testimony and made the determination that Detective Hankison was the one that needed to be indicted,” Cameron, Kentucky’s first Black attorney general, replied.
In an interview with MSNBC following Cameron’s press conference, Sen. Dick Durbin (D-Ill.) brought up that fact that the crux of the grand jury’s acquittal was based around one witness’s corroboration of the officers’ story, calling the killing of Black people in the U.S. by law enforcement “systemic.”
Other congressional lawmakers also voiced their disgust at the grand jury’s decision.
Sen. Bernie Sanders (I-Vt.) tweeted the ruling was “a disgrace and an abdication of justice. Our criminal justice system is racist. The time for fundamental change is now.”
Republican Sen. Rand Paul (Ky.) who has advocated for the outlawing of no-knock warrants had a somewhat muted response, saying that “the rule of law is an important thing to follow and hopefully people will accept that.”
Fearing protests of the ruling could lead to unrest, the Louisville Metropolitan Police Department issued an emergency declaration on Monday, freezing days off and vacation time for the department’s officers “until further notice” so “the appropriate level of staffing” could be ensured.
Lawmakers critical of the decision were among those calling for people to be calm.
Louisville police put up vehicle barricades around the perimeter of the Louisville downtown area as well as around Jefferson Square Park, the launching point for many of the Black Lives Matter protests this summer.
As expected, following the announcement, protestors flowed into Louisville’s downtown area.
Mayor Greg Fischer (D) has imposed a 72-hour curfew that started at 9 p.m. Wednesday and the Kentucky National Guard was also activated before the ruling was made.
Taylor — along with George Floyd, a Black man who was killed by a white Minneapolis police officer at the end of May — was one of the main focal points of a tense summer that featured a resurgent Black Lives Matter movement and nationwide protests.
President Trump, who has outwardly opposed the protests, told reporters that he didn’t know enough about the situation.
“My message is that I love the Black community, and I’ve done more for the Black community than any other president, and I say with the possible exception of Abraham Lincoln.”
National