Ginsburg becomes first woman to lie in state in the Capitol 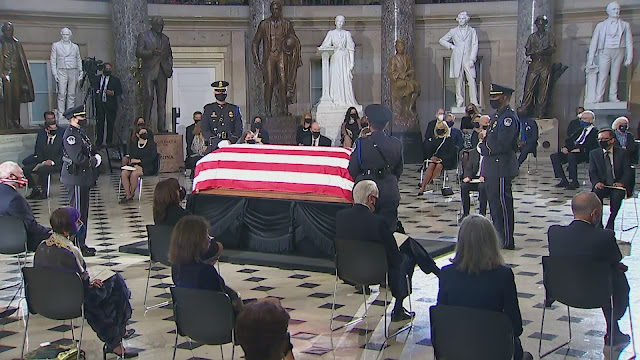 The late Supreme Court Justice Ruth Bader Ginsburg became the first woman to lie in state in the Capitol on Friday, underscoring her impact as a trailblazer for women.
Ginsburg is also the first Jewish person and only the second Supreme Court justice to lie in state at the Capitol.
Lawmakers, along with Ginsburg’s family and friends, wiped away tears and placed their hands over their hearts as they gazed upon her flag-draped casket in the Capitol’s Statuary Hall. Ginsburg's personal trainer paid his respects by doing push-ups in front of her casket.
Ginsburg's casket was placed on top of a catafalque built in 1865 for when President Lincoln lied in state and has been used for the rare honor ever since.
“It is with profound sorrow and deep sympathy to the Ginsburg family that I have the high honor to welcome Justice Ruth Bader Ginsburg to lie in state in the Capitol of the United States. She does so on the catafalque built for Abraham Lincoln. May she rest in peace,” Speaker Nancy Pelosi (D-Calif.) said as she opened Friday’s ceremony.
In a separate statement, Pelosi said, “Ruth Bader Ginsburg: petite in size, monumental in impact. Justice Ginsburg embodied justice, brilliance and goodness. Her passing is an incalculable loss for our democracy and for all who strive to build a better future for our children.”
“On the West façade of the Supreme Court, facing the Capitol, are inscribed the words ‘equal justice under the law.’ Justice Ginsburg dedicated her life to that principle – and now, we must continue her work, upholding that same ideal,” Pelosi added in her statement.
The rabbi who leads the Washington synagogue where Ginsburg worshiped eulogized her as a leader in gender equality who demonstrated persistence over the course of her lifetime and with her judicial dissents.
"Pursuing justice took resilience, persistence, a commitment to never stop. As a lawyer, she won equality for women and men not in one swift victory, but brick by brick, case by case, through meticulous, careful lawyering," Rabbi Lauren Holtzblatt said. "And even when her views did not prevail, she still fought."
"Despair was not an option. She said and I quote, 'Dissents speak to a future age. It's not simply to say, my colleagues are wrong and I would do it this way. But the greatest dissents do become court opinions and gradually, over time, their views become the dominant view so that the dissenters hope that they are writing not for today, but for tomorrow,'" Holzblatt continued.
"Justice Ginsburg's dissents were not cries of defeat. They were blueprints for the future," she added.
The only other woman to have had her casket lie in the Capitol was civil rights icon Rosa Parks, who laid in honor in the Capitol rotunda in 2005. As a public official, Ginsburg is the first woman to lie in state.
The only other Supreme Court justice to do the same was William Howard Taft, who also served as president, in 1930.
Democratic presidential nominee Joe Biden and his running mate, Sen. Kamala Harris (D-Calif.), were both in attendance at the invitation-only ceremony. Guests were limited and spaced apart in accordance with social distancing guidelines due to the coronavirus pandemic.
Harris, the third female vice presidential nominee on a major party ticket, said afterward that Ginsburg "absolutely" cleared the path for her career.
"Because she first of all made America see what leadership looks like, and in the law, in terms of public service, and she broke so many barriers. And I know that she did it intentionally, knowing that people like me could follow," Harris said.
Biden noted that he was the chairman of the Senate Judiciary Committee during Ginsburg's confirmation process when she was nominated by then-President Clinton to the court.
“I first met her when I did her hearings. I was the chairman of the committee and she was confirmed. Wonderful memories," Biden said.
Members of the public had the opportunity to pay their respects on Wednesday and Thursday as Ginsburg laid in repose at the top of the Supreme Court steps.
President Trump and first lady Melania Trump stopped by the Supreme Court on Thursday to pay their respects -- but were met with boos from a crowd that shouted “vote him out!”
Neither Senate Majority Leader Mitch McConnell (R-Ky.) nor House Minority Leader Kevin McCarthy (R-Calif.) were at Friday’s ceremony. House Minority Whip Steve Scalise (R-La.) and numerous female GOP lawmakers made an appearance in Statuary Hall.
McConnell’s office did not provide an explanation for his absence.
Once the public ceremonies to mourn Ginsburg’s death conclude on Friday, Trump is expected to announce his nominee to fill the Supreme Court vacancy on Saturday.
Senate Republicans are planning to move quickly to fill the sudden vacancy left by Ginsburg, who died last Friday at the age of 87.
Their plans to move swiftly have drawn howls of outrage from Democrats who are angry over McConnell’s refusal to consider then-President Obama’s nominee in 2016 when the late Justice Antonin Scalia died in February.
National