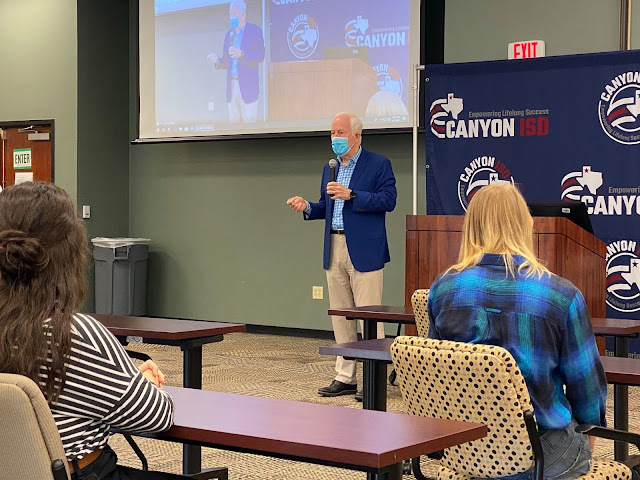 U.S. Senator John Cornyn (R-TX) announced today at Canyon ISD Support Center that public schools in the Amarillo region so far have been allocated $7.7 million in federal coronavirus relief resources from Congress. While there, he visited with Amarillo and Canyon students, teachers, and administrators to learn about how they have used federal CARES Act funds to transition to hybrid in-person and remote learning during the coronavirus pandemic.

"In some parts of the state, as many as a third of the students don’t have access to Wi-Fi or broadband and while Congress appropriated billions of dollars, you know, there’s a difference between snapping your fingers and actually having it implemented," Cornyn said. "It takes some time, and I am worried in the meantime, some of these kids from low income families are falling further and further behind."

He first joined high school seniors from both Canyon and Randall High Schools, attending both in-person and virtually, to help teach a lesson on U.S. government.  Following the government class and a discussion with Dr. Flusche on schools re-opening, Sen. Cornyn held a socially-distanced joint press conference.

"Randall and Canyon High School students got the opportunity to visit with US Senator Cornyn today. The District is extremely impressed with these government students, they took advantage of asking several tough questions facing the United States government," the Canyon ISD said.

Thus far, Sen. Cornyn has worked to secure $7.7 million in funding for public schools in the Amarillo area, including: