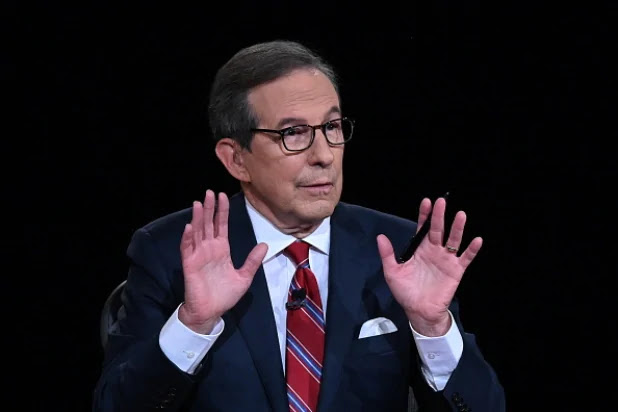 Chris Wallace was drawn into the vicious debate between President Trump and Democratic nominee Joe Biden on Tuesday night, with the Fox News anchor growing visibly frustrated over the course of the unruly 90-minute spectacle in which he struggled to maintain order.
Time and again, Wallace tried to rein in Trump, who repeatedly interjected and talked over Biden in an apparent effort to get under his rival’s skin.
Wallace, who has frustrated Trump by sometimes critically reporting on his administration, scolded the president and increasingly grew exasperated as he tried to enforce the rules.
The campaigns agreed that each candidate would get two minutes of uninterrupted speaking time in response to the questions given them, and Wallace tried — but largely failed — to enforce the agreement.
It was clear from the outset that the president would not adhere to the rules, leading to a terse exchange between Trump and Wallace right off the bat.
“Mr. President, I’m the moderator of this debate and I’d like you to let me ask my questions,” Wallace said.
“I guess I’m debating you, not him,” Trump shot back. “I’m not surprised.”
Trump’s interruptions frustrated Biden, who often responded by laughing incredulously or shaking his head and acquiescing to the president’s badgering.
“He never keeps his word,” Biden muttered at one point.
Wallace’s inability to keep Trump in check was a major story coming out of the debate.
Anchors and hosts at rival networks, such as CNN and MSNBC, expressed shock and anger over what they described as Trump’s steamrolling of the moderator.
“President Trump acted as the abuser tonight, and Chris Wallace was among the abused,” said MSNBC’s Nicole Wallace.
CNN’s Dana Bash called the debate a “shit show.” CNN’s Jake Tapper unloaded on the president’s rule-breaking performance.
“That was a hot mess, inside a dumpster fire, inside a train wreck,” Tapper said. “That was the worst debate I’ve ever seen. It wasn’t even a debate. It was a disgrace and primarily it was because of President Trump, who spent the entire time interrupting, not adhering to the rules he agreed to.”
Across the cable news networks and on social media, viewers complained about the incessant debate crosstalk and the president’s refusal to play by the rules.
A flash CBS poll found that 69 percent of viewers said the debate made them feel “annoyed.”
“I’m having trouble following his ranting,” Biden said at one point.
“I’m having a little trouble myself,” Wallace responded.
The president also came out of the debate complaining about Wallace.
In the minutes after the debate, Trump retweeted a conservative media CEO who said, “Regardless who you’re pulling for, I think we can all agree that Joe Rogan would do a much better job moderating this thing than Chris Wallace.”
The president played off Wallace to complain about the coverage he gets from the news media, one of his favorite topics.
“They give you good press,” he said to Biden. “They give me bad press. Because that’s the way it is unfortunately. I don’t care. I’ve gotten used to it.”
On two separate occasions, Wallace tried to shut down the president when he pivoted to an attack on Biden’s son, Hunter Biden.
During one of the president’s Hunter Biden broadsides, Wallace stepped in to remind Trump of the rules.
“The country would be better served if we allowed both people to speak,” Wallace said. “I’m appealing to you to do that.”
“What about him?” Trump responded.
“Frankly, you’ve been doing more interrupting,” Wallace shot back.
Another time, after Trump brought up Hunter Biden’s past drug use, Wallace responded: “The American people would rather hear about more substantive issues.”
“As moderator here, sir, I’m going to make a judgement call,” Wallace added, before shifting to another topic.
The dynamic between Trump and Wallace was one of the more memorable storylines coming out of a debate that seemed to leave everyone frustrated.
At the end of the night, Wallace rubbed his forehead and dropped his arm on his desk in frustration with Trump.
“If you want to switch seats we could do that,” Wallace said.
National