Can the Democrats stop Barrett? 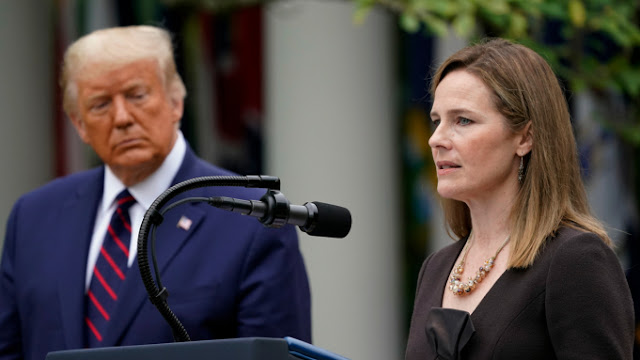 It must have been quite disappointing for those who were expecting Amy Coney Barrett to appear in a red habit and veil to take the oath of subservience to The Patriarchy, but Donald Trump and the nominee (along with her beautiful family) both gave fine speeches.
Was the Trump presidency worth it for conservatives? History will tell. Considering the accelerating radicalism of the modern Left — evident in the feverish reaction to Barrett’s nomination — the Court is clearly going to be more important than it has been in years.
Will it help Trump win in 2020? I’m no prognosticator, but politics has to be about more than always situating the party for the next win. Occasionally you’re going to have to fulfill promises. These justices fulfill the wishes of the vast majority of the Right, sans a handful of Trump-obsessed former conservatives.
Nor should it be forgotten that, if Barrett is confirmed, Mitch McConnell will have become one the most effective and consequential conservative politicians — nay, politicians, period — in American history. Call him a hypocrite if you like, but the risk of denying Obama another Constitution-corroding justice in 2016, widely seen as politically self-destructive by Washington commentators, was worth it. His constitutionally kosher position turned into three justices, who, one hopes, will abide by their stated originalist and Scalia-like disposition. Their rulings will long outlast any fleeting partisan squabble.
Can Democrats stop her?
Three years ago, Barrett was confirmed by the Senate to the Seventh Circuit Court of Appeals 55 to 43 vote. The path of least resistance for those Democrats would be to argue that Coney is a jurist with some bad opinions, but competent and decent. The justification they can offer for voting against her is that Trump is a modern-day Nero and the process has been irreparably broken. Of course, why a modern-day Nero would nominate a decent and competent jurist who will likely inhibit the power of the executive branch is a big mystery.
In the long run, the idea that the confirmation process is broken because the president follows the prescribed constitutional process is also going to be a heavy lift. News organizations keep push-polling voters into saying they don’t want a confirmation, but I still don’t buy the notion that Democrats are going to be more energized by a confirmation hearing than conservatives. As I wrote earlier this week, if Trump loses in November it won’t be for keeping his promise to appoint constitutionalists.
Barrett will not be susceptible to the kind of insidious personal attacks that the media and Democrats launched during the Brett Kavanaugh hearings. That puts them are in a tough spot. If they go after Barrett on all the usual stuff — she wants to take away your health care, ban abortion, and so on — voters won’t believe the nomination is some earth-shattering event that undermines the very foundations of democracy. Voters have been hearing the same fearmongering for decades. It will just be more of the same.
But Democrats also need to excite their base. If they go after her on the Catholic “dogma” stuff or her big family, they’re going to look like nuts. Considering the ugly rhetoric that regularly flows from the likes of Mazie Hirono and Kamala Harris, it will be interesting to see if Democrats can maintain message discipline.
The Senate Judiciary Committee will start a four-day hearing on October 12. Once Barrett is being asked questions about her success, family, precedent and so on, it seems likely that few voters are going to be thinking about process arguments anymore. And when Democrats claim that Republicans are rushing and ramming through the nomination, they can simply point out Justice Ginsburg was confirmed in 42 days — or two fewer than Coney is scheduled to take.
You can see them grappling with the problems in real time. The latest line of attack asks: “what kind of person would accept this nomination under these circumstances.” Well, the conditions are the same as they have been for every justice sitting on the Court. But, I suppose, the best answer is: an accomplished jurist who says things like, “I love the Constitution of the United States.” Which is more we can say for the partisan activists making those arguments.
Opinion