Barrett on Scalia: His judicial philosophy is mine 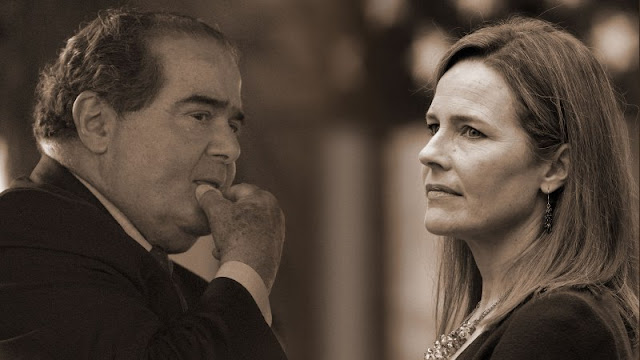 When Supreme Court nominee Amy Coney Barrett spoke in the White House Rose Garden following her formal nomination on Saturday evening, she was everything she’s been made out to be: poised, smart, and kind-hearted.
She began by honoring the life of Justice Ruth Bader Ginsburg. “The flag of the United States is still flying at half-staff, in memory of Justice Ruth Bader Ginsburg, to mark the end of a great American life,” Barrett said. “Justice Ginsburg began her career at a time when women were not welcome in the legal profession. But she not only broke glass ceilings, she smashed them. For that, she has won the admiration of women across the country, and indeed, all over the world. She was a woman of enormous talent and consequence, and her life of public service serves as an example to us all.”
Then she spoke of the friendship between the late Justice Ginsburg and the late Justice Antonin Scalia, for whom Barrett clerked two decades ago. “Justices Scalia and Ginsburg disagreed fiercely in print without rancor in person. Their ability to maintain a warm and rich friendship despite their differences even inspired an opera,” Barrett said. “These two great Americans demonstrated that arguments, even about matters of great consequence, need not destroy affection. In both my personal and professional relationships, I strive to meet that standard.”
Then she delivered the most important part of her speech:
I clerked for Justice Scalia more than 20 years ago, but the lessons I learned still resonate. His judicial philosophy is mine, too. A judge must apply the law as written. Judges are not policymakers, and they must be resolute in setting aside any policy views they might hold.
“His judicial philosophy is mine, too.”
Barrett could have described her judicial philosophy without tying herself so closely to Scalia. She has practically written Democratic attack ads for them: It would not be fair in many cases, but it would be easy to dredge up every unpopular Scalia opinion and slap that Barrett quotation on the screen.
But the statement was refreshingly straightforward and honest for a Supreme Court nominee, and it also will obliterate any argument from Senate Democrats about how they need more time to discover what Amy Coney Barrett truly believes about the Constitution.
They already know what she thinks, of course. They’ve been preparing for a Barrett Supreme Court nomination fight for three years. Her 2017 appeals-court nomination hearing was a dry-run for a Supreme Court confirmation battle, and it won’t take much time to go through her opinions over the last three years.
With her candor, Barrett helped make the argument in favor of a speedy confirmation vote. Yet, she has still left those Democratic campaign consultants with a dilemma: Do they really want to run ads attacking someone as impressive as Barrett and shift the focus away from Trump?
Opinion